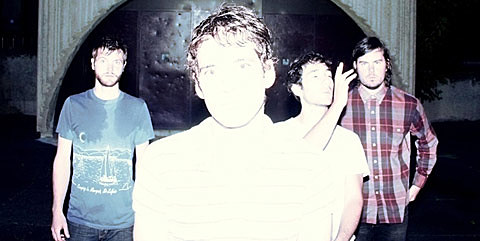 Montreal's Suuns are making good use of their visas and heading back to NYC for three shows this month: Jan. 25 at The Rock Shop, then Jan. 26 for an early show at Mercury Lounge and Jan. 27 at Shea Stadium. We're giving away a pair of tickets to the Rock Shop show -- just send an email to BVCONTESTS@HOTMAIL.COM with the subject line "SUUNS" and we'll pick a winner at random.

You can download two tracks from Suuns swell debut, Zeros QC, which came out last year on Secretly Canadian. If you've seen them already -- and in NYC you've had plenty of chances, including the Brooklyn Vegan CMJ showcase  -- you know they're good live. And if you haven't yet experienced their kraut-y, showgazy miasma in person, you should remedy that. They also recently did a Daytrotter session that's worth checking out.

In addition to the NYC dates, they're also playing Burlington, VT on the way down here, plus a couple Canadian dates with fellow Montrealers Besnard Lakes. (BL's Jace Lacek produced Zeroes QC.) The band will also be playing SXSW this year, so expect a tour around that as well. All 2011 North American tour dates are below...

--
Suuns - Up Past the Nursery