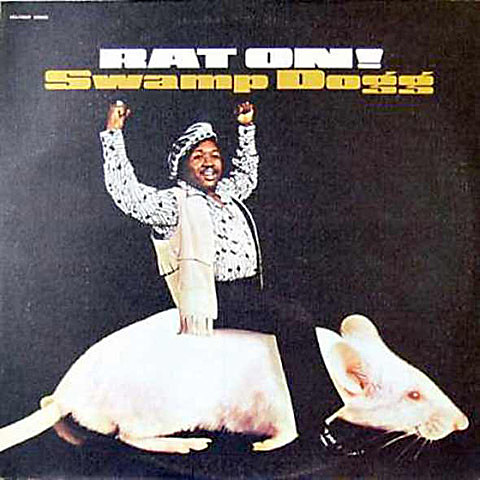 "If your dog sleeps on the sofa, shits on the rug, pisses on the drapes, chews up your slippers, humos your mother-in-law's leg, jumps on your new clothes, and licks your face, he's never gotten out of character. You understand what he did, you curse him while making allowances for him, but your love for him never diminishes. Commencing in 1970, I sung about sex, niggers, love, rednecks, war, peace, dead flies, home wreckers, Sly Stone, my daughters, politics, revolution, amd blood transfusions (just to name a few), and never got out of character" - [Swamp Dogg]

The statement is a great testament to Swamp Dogg's eclecticism. That grows even clearer with one viewing of the art in his discography, the above pictured "Rat On!" included.

In 2010 Swamp Dogg, aka Jerry Williams, Jr., (born 12 July 1942), played his first NYC show in over a decade ("His last local appearance had taken place at Coney Island High, an East Village rock club that closed in July 1999"). According to New York Rocker:

Swamp Dogg killed. His set was a triumph.

The unknowing and unsuspecting among us were converted for life and sent forth into the night, frothing at the mouth and babbling in tongues of ecstasy. The true believers, your faithful scribe among them, were lifted to Soul Heaven on a pair of golden fried chicken wings (with choice of grits, black-eyed peas, or collard greens).

Swamp Dogg (lead vocals and electric piano) was backed capably and sympathetically by The Revelations of Brooklyn NY. I believe the personnel for this gig was Wes Mingus (guitar), Borahm Lee (keyboards), Josh Werner (bass) and Gintas Janusonis (drums) plus a three-man horn section.

If you missed it, July 2011 brings four more chances to catch the "the soul genius that time forgot." Two of those East Coast shows are in NYC, and one is even free.

Swamp Dogg will play a free show in Brooklyn from noon-2pm at Metrotech on July 14th, part of the ongoing BAM R&B Festival (which hosts the Port-au-Prince-based band RAM today, July 7th). He'll then hightail it up to Johnny D's in Somerville, MA for a show later that night, but he returns Brooklyn to play the early show at Southpaw the following night (7/15). Tickets are still available. The Revelations (featuring Tre Williams), who backed Swamp at City Winery, are also listed on the Park Slope bill (though the Metrotech show doesn't mention them).