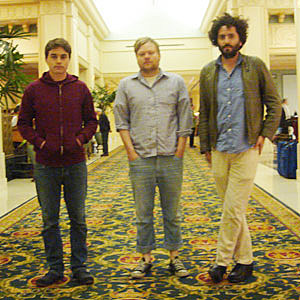 Swan Lake is the new project of Dan Bejar, Carey Mercer, and Spencer Krug. Back in June Carey told us they were finished recording an album. Well, the album is coming out on Jagjaguwar (home of Oneida, Ladyhawk, Wilderness & Okkervil River), and that's who just sent out this first much-anticipated MP3......

"I don’t like Spencer." [Martin from Think About Life]

Call them what you will (a certain word that rhymes with "Uber Soup" is probably coming to mind for a lot of you), but the three members of the newly-formed Swan Lake (Dan Bejar of DESTROYER and NEW PORNOGRAPHERS, Carey Mercer of FROG EYES, and Spencer Krug of WOLF PARADE and SUNSET RUBDOWN) are all old friends and have been collaborating in one way or another for years. They will release their debut album, "Beast Moans", in both the CD and LP formats on Jagjaguwar on November 21, 2006.

Mercer and Krug's connection goes back the furthest, as Krug has always been an on-again, off-again member of Mercer's Frog Eyes, appearing on record with him as far back as the band's 2002 debut, "The Bloody Hand". The two are also former roommates.

When Bejar was putting a band together to flesh out his midi-based Destroyer album "Your Blues", he picked Frog Eyes as his backing band, and he also took them on the road as his opening act. They also recorded an EP together -- "Notorious Lightning and Other Works" -- with new versions of songs from "Your Blues". For the European tour promoting "Your Blues", Mercer and Krug were his band, and thus the seed was planted for Swan Lake to form; i.e., why not make this a real band and collaborate not just in a live setting but also in the process of songwriting? Before they chose a band name, Mercer would often refer to the new project as "The Songwriters Project".

Their full-length record features, among other things, beast moans, starling voices, cobra hi hats and arpeggiating pianos. The songs are great weaves, showcasing the famous and very distinctive songwriting styles of Bejar, Krug and Mercer. The sum is definitely greater than the parts, and at distinct points on the record a new "combined" style emerges that throws whole heaps of magic into the air, sounding like nothing else.

"Beast Moans" was recorded in a summer cottage town in Canada, and in Victoria, in a house that Krug and Mercer are familiar with and Bejar feels comfortable enough with. It was "self-produced". "Beast Moans" is a testament to friendship, eternal and otherwise.

"The fact that I have no real idea what this record sounds like is a testament to who the alpha males are in the project, if you're gonna look at it that way" [Dan Bejar]