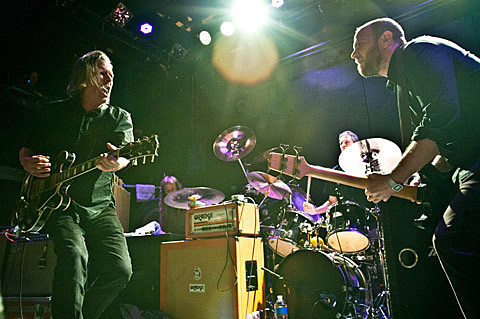 As mentioned, Swans will play Music Hall of Williamsburg on February 7 as a makeup date for their October 29 show, which was postponed due to Hurricane Sandy. When we first mentioned the show, it was unclear if Devendra Banhart, who was set to open the 10/29 show, was still on the bill but it has since been confirmed that Devendra will in fact be there. Tickets for that show are still available and any tickets purchased for 10/29 will be honored as well. If you had a ticket to their 10/28 Bowery Ballroom show, which wasn't cancelled, but couldn't make it because of Hurricane Sandy, Michael Gira is inviting you to send the band a facebook page and they'll help you out.

Swans have also added a second date happening at the same venue one day earlier (2/6). No opener is listed for this show at the moment. Tickets go on sale Wednesday (12/19) at noon.

A list of all dates and a stream of "The Seer," the massive title track to the even more massive album of the same name, below...