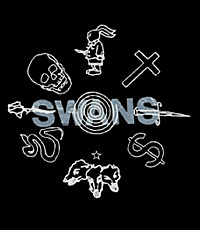 "Michael Gira's re-activated Swans will be undertaking their first U.S. performances in 13 years, celebrating the Fall release of the first new Swans album since Soundtracks For The Blind (1997). The album was recorded by Jason LeFarge at Seizure's Palace in Brooklyn and is currently be remixed by Gira with Bryce Goggin (Antony & The Johnsons, Akron/Family) at Trout Recordings." [PR]

Tickets go on AmEx presale at noon for the October 9th Swans show at Bowery Ballroom. General sale starts Friday. which is also when the October 8th Brooklyn show IS ON SALE NOW TOO. The two NYC shows, and Pop Montreal, are part of a now-announced nine date tour that kicks off at the Troc in Philly on September 28th (on sale Friday too). All dates, and a message from Michael Gira about the reunion, below...

"About reconstituting Swans: ...there was a point a few years ago during a
particular show when I was on tour with Angels Of Light, with
Akron/Family serving as the backing band. It was during the song The
Provider. Seth's guitar was sustaining one open chord (very loudly),
rising to a peak, then crashing down again in a rhythm that could have
been the equivalent of a deep and soulful act of copulation. The whole
band swayed with this arc. Really was like riding waves of sound. I
thought right then, "You know, Michael, Swans wasn't so bad after all..."
. Ha ha! It brought back - in a flood - memories, or maybe not memories,
more a tangible re-emersion in the sensation of Swans music rushing
through my body in waves, lifting me up towards what, I can only assume,
will be my only experience of heaven. It's difficult - and probably
pointless - to try to describe this experience. It's ecstatic, I suppose -
a force of simultaneous self negation and rebirth. Really, I probably only
experienced this a handful of times to such an extreme extent during the
entire 15 year history of Swans. All the elements have to align perfectly,
and you can't force it, though you might constantly strive for it. I don't
mean to be too lofty here, but it's a fact. I'm talking about my own
experience of the music (though I'd hope people in the audiences along the
way might have experienced a similar episode). When I ask myself if I
believe in God, I start to say NO, but then I remember that sensation, and
I'm not so sure. So I want more of that, before my body breaks down to
such an extent that it won't be possible any more. So I'm doing it.
Naturally, some of the material for this new record will be songs,
centered around the voice and words. Other parts (I'm hoping) will be
reaching for what I've described above. One thing I want to point out
right now: THIS IS NOT A REUNION. It's not some dumb-ass nostalgia act. It
is not repeating the past. After 5 Angels Of Light albums, I needed a way
to move FORWARD, in a new direction, and it just so happens that
revivifying the idea of Swans is allowing me to do that. I'll be using
what I learned in the last several years to inform the way this new
material develops, while carrying forward from where Swans left off with
its final album Soundtracks For The Blind, and in particular, Swans Are
Dead. If you have expectations about how Swans should be, that's your
business, but it would be a disservice to both of us if I were to make
music with your needs in mind, and the music would certainly suffer as a
result. In any event, I certainly never thought this day would arrive, but
it's inevitable, it's here, it's fate, so I'm succumbing to it.
Helping me in this quest are the fantastic musicians and friends listed
below. I'll enter the studio with the songs, we'll hash them out together,
someone will come up with something unexpected, then that will lead to new
ideas, the song will take a different trajectory and the material will
grow on its' own. This is what I'm hoping, anyway. Here's the main
musicians (though probably a lot of guests on the recording). These are
the people best suited - in terms of my relationship with them and their
particular musical attributes - to help move the music forward: