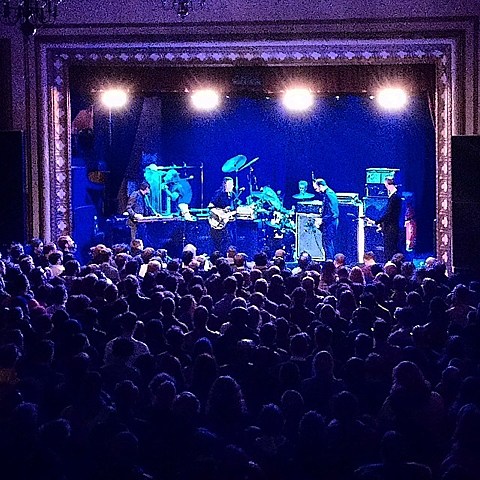 Experimental rock giants Swans wrapped up a killer 2014 in their hometown of NYC with a sold-out show at Warsaw on Friday (12/12). Opening was another intense (but much younger) NYC band, Liturgy, and then came Swans, eardrum-shattering as always. Like they've been doing on this tour, they played a solid amount of new material as well as a couple off 2014's To Be Kind, including the half hour-plus "Bring the Sun." You can check out a clip of that one from Friday's show, along with the setlist, below.

Now that the Warsaw show is behind them, Swans have added a new NYC date to their 2015 tour schedule. They'll hit their hometown once again on February 26 at Bowery Ballroom with support from Xylouris White (aka George Xylouris and Dirty Three drummer Jim White), who put out the album Goats (produced by Fugazi's Guy Picciotto) earlier this year. Tickets for the Bowery show go on sale at noon on Friday (12/17) with an AmEx presale starting at noon on Wednesday (12/17).

Updated dates are listed, with the video/setlist from Warsaw, below...

Swans @ Warsaw - 12/12/14 Setlist: (via)
Frankie M
A Little God In My Hands
The Cloud of Unknowing
Just a Little Boy (For Chester Burnett)
I Forget
Bring the Sun / Black Hole Man