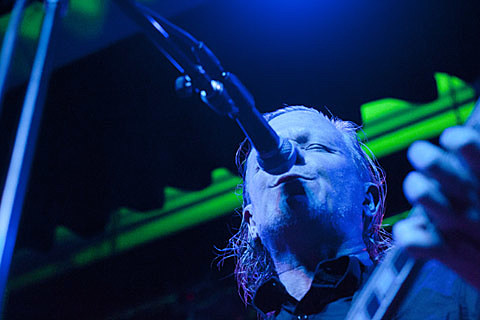 NYC experimental rock vets Swans have a new album featuring St. Vincent and others on the way titled To Be Kind (due 5/13 via Young God), and though we're still waiting on a full tour, the band have just announced two hometown shows following Michael Gira's solo tour. The NYC shows happen on May 18 at Bowery Ballroom and May 19 at Music Hall of Williamsburg. Opening both of those shows is Norway's Jenny Hval, who in addition to also having a song called "The Seer," is sure to be an excellent prepper for Swans' earth-shattering set. Tickets for those shows go on sale Friday (2/14) at noon with an AmEx presale starting Wednesday (2/12) at noon. All currently known dates are listed below.

UPDATE: More dates announced, all of which are listed below.

In addition to the new Swans album, the band's 1989 goth/baroque/folk album, Burning World (that Gira is not a fan of), is being reissued on vinyl via the 1972 label on March 4. You can pre-order it now via Midheaven.