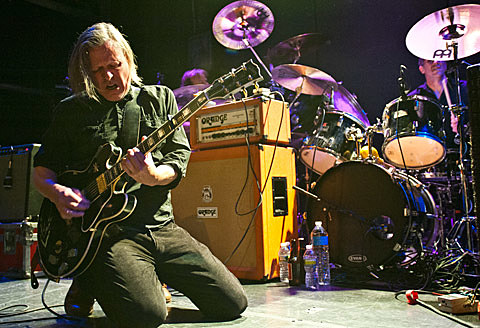 As mentioned, Swans, who managed to play Bowery Ballroom on October 28, one of the few shows that actually happened that day in the wake of Hurricane Sandy, ended up having to postpone their Music Hall of Williamsburg show which would have happened a day later (10/29). They've just announced that the makeup date for that show will happen on February 7 at Music Hall of Williamsburg. Tickets for that show go on sale Friday (12/7) at noon and all tickets purchased for the 10/29 date will also be honored. Otherwise refunds are available at the point of purchase.

Devendra Banhart was scheduled to play the original date (and he also played the Bowery Ballroom show that happened the day before), but he doesn't appear to be on the bill for the new one. He did, however, just announce that he'll release the followup to 2009's What Will We Be at some point (release date TBA) on his new label home, Nonesuch. The album's called Mala and it was produced by Devendra himself and his bandmate Noah Georgeson.

A live video of "Apostate" from The Seer live DVD and a list of all Swans dates are below.

the apostate (edit) from Marco Porsia on Vimeo.