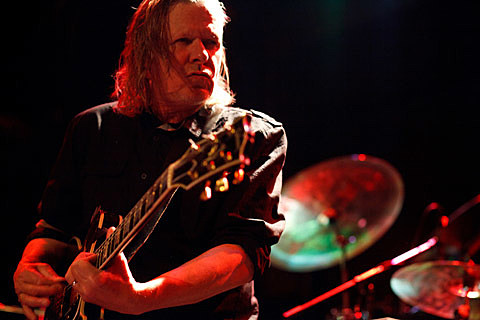 "As you can see we're playing mostly new songs and really fucked up versions of old songs," said Michael Gira during last night's Music Hall of Williamsburg show (5/19), the second of two sold out Swans shows in NYC on their current tour. It was true. You could hardly call this the To Be Kind tour -- those songs were all mostly played on The Seer tour -- the only real recognizable parts of that album played were "A Little God In My Hands," "Oxygen" and a small portion of "Bring the Sun." Otherwise the two-hour set included "The Apostate" from the The Seer, and three new songs that appear to (at least tentatively) be titled "Frankie M," "Don't Go" and "Black Hole Man."

If it sounds like I'm saying I was disappointed, far from it. It doesn't really matter what Swans' setlist is because every show they put on is a unique, intense experience. When the majority of other bands with classic material dating back to the '80s and '90s (like Swans) get on stage and don't play any of it, there's likely to be some cranky concert goers. But Swans have become a legacy band working entirely on their own terms, far from the type to do a nostalgia tour. And with the incredible creative burst they've had since their 2010 reformation, they wouldn't need to. The current six-piece version of Swans that recorded their last three records is literally a different a band (this lineup doesn't appear on any other Swans album), and it really feels like they're working with the passion of a new group. The way they work out new material on the road and are seemingly over it once it's recorded and released is a tactic tons of small local bands use, but hardly ever seen from a band at Swans' level.

And just like the To Be Kind material did on The Seer tour, these new songs sound great. "Frankie M" actually had a conventional chord change, which, in a set where that happened zero other times, ends up being one of the least expected moves Swans made. "Don't Go" evolved into the kind of lengthy psychedelic trip that "The Seer" and "Bring the Sun" provided at previous shows and "Black Hole Man," played as the alternate ending to "Bring the Sun," replaced the freakout shrieks of "Toussaint L'Ouverture" with Gira's demonically spiritual chants.

Swans' tourmate Jenny Hval and her two-piece backing band opened the show with music that was comparatively softer but similarly dark and uniquely distant from most modern trends. Swans' openers always feel well curated, and Jenny was no different.

We didn't get pictures of the MHOW show, but we did post pictures of Sunday's Bowery Ballroom show. Check out more of those HERE and the setlist from MHOW below...