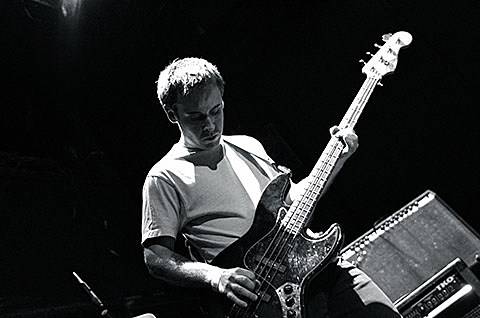 Swearin' have spent plenty of time on the road this year, and they'll continue to do so into 2014. They've just announced a March run which kicks off in NYC at Cake Shop on 3/6 and Rough Trade on 3/7, which will be the band's first NYC shows since the release of their excellent Surfing Strange LP. The openers for the Rough Trade show are Marvin Berry and the New Sound Even Hand and Certain Spiders (who previously opened for Waxahatchee In NYC), but no openers have been announced for the Cake Shop show yet. Tickets for the Rough Trade show go on sale Friday (12/6) at noon. No advance tickets for Cake Shop. All dates are listed below.

UPDATE: Cassie Ramone of The Babies and the soon-to-be-broken-up Vivian Girls opens the Cake Shop show, and advance tickets are on sale.

Swearin' are currently on the road with Waxhatchee, and that tour doesn't hit NYC, but Waxahatchee will play a Pitchfork party with Mutual Benefit on 12/14 in Brooklyn, and their tour with Cayetana and All Dogs hits NYC in January. Swearin' also play New Year's Eve in Philly with Screaming Females.

All dates are listed, along with a video from Surfing Strange, below...