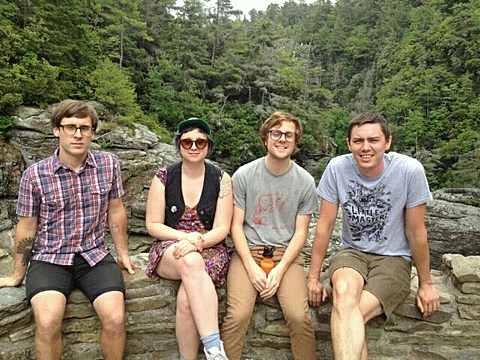 We were just talking about The Julie Ruin's tour, which includes a sold-out NYC show with Brooklyn/Philly lo-fi pop punks Swearin' on September 3 at Bowery Ballroom. If you missed out on getting tickets for that, but still want to see Swearin' (and in a smaller, more graffitied venue), you're in luck because you can catch them the next day (9/4) at 285 Kent with Shellshag and Honey (ex-Psychic Ills). Tickets for that show are on sale now.

You can also catch Swearin' twice this week. First (if you RSVPed) at House of Vans on Thursday (8/15) with Kid Dynamite (last US show), Joyce Manor, and Red Hare.

Then, on Saturday (8/17) at Silent Barn, Swearin' will take part in the Salinas Records tenth anniversary which also includes singer Allison Crutchfield's previous band PS Eliot (which she drums in and her twin sister, Waxahatchee's Katie Crutchfield, sings), The Measure [sa], The Ambulars, All Dogs, Radiator Hospital, Little Lungs and more.

In other news, Swearin' recently announced on Facebook that they finished tracking songs for their upcoming second album. Stay tuned for more on that.

Meanwhile, stream their 2012 LP, along with their updated list of tour dates, below...