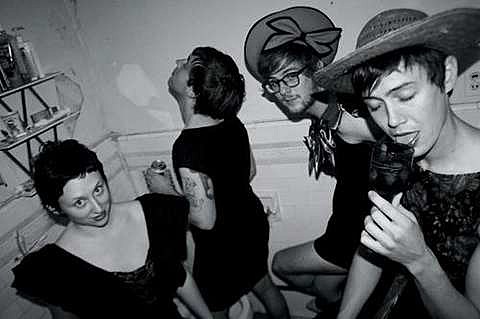 2011's breakup of P.S. Eliot has already given us a great debut LP from member Katie Crutchfield under the moniker Waxahatchee, and now her twin sister/ex-P.S. Eliot bandmate Allison Crutchfield has shown us what she's been up to with a self titled LP from her band Swearin'. Bill mentioned that you should check out Swearin' at this year's Popfest, which went down in May, and there's been many chances (some with Waxahatchee) to catch the band since. Your next chance to see Swearin' in their hometown of NYC is TONIGHT (8/16) at Union Pool where they'll be playing with the also-great Nude Beach, for whom the show is a record release show, along with Golden Clouds and Yogurt Brain.

The Swearin' LP blends the sort of pop punk and folk punk that we've come to expect from P.S. Eliot and its related projects, and also fits in well with much of the Don Giovanni roster (for whom Waxahatchee records). Allison's lyrics are confessional and the music is catchy but raw. Think early Thermals or Rainer Maria you'll get the idea. You can stream the first track from the album, "1," at the bottom of this post.