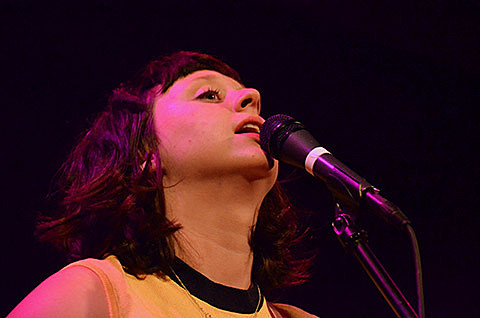 Both Screaming Females and Swearin' spend a lot of time touring, and with both bands living so close to NYC, we get plenty of chances to see them here. Neither band have anything scheduled here at the moment, but they'll be pretty close when they team up for a show in Philly on New Year's Eve at Johnny Brenda's. This punky double bill is as a good a reason as any to ring in the new year in Philly, and tickets to do so go on sale Wednesday (11/13) at noon. Philly band Batty, who, like Screaming Females, played Ladyfest Philly this year, open the show. All dates for both Screaming Females and Swearin' are listed below.

If you haven't heard the new Swearin' album Surfing Strange, which came out last week (11/5), I think it's a huge step up from their already-great debut and I highly recommend it. On the debut, they basically came off as a pop punk band -- a lo-fi one that appealed to the indie rock kids, but a pop punk band nonetheless (not saying that's a bad thing, by the way) -- and it made sense. Most of the songs were handled by Allison Crutchfield, whose pop punk band P.S. Eliot, which she drummed in and her sister Katie (who now records as Waxahatchee) sang/played guitar in, had just broken up.

But the new album is far more collaborative, and as a result, far more diverse. Guitarist Kyle Gilbride (who used to front Big Soda) splits lead vocals almost evenly with Allison this time around, and they do more Pixies-style dual vocals together too. When Kyle does take lead, he's letting out an aggressive whine falling somewhere between Superchunk's Mac McCaughn and Built to Spill's Doug Martsch, with the earworm melodies to back comparisons like that up. Meanwhile bassist Keith Spencer, who didn't sing lead at all on the first album, takes the mic for two songs on this one, both wildly different from each other and from the rest of the album. "Melanoma" falls somewhere between Mineral and Red House Painters, and "Glare of the Sun" sounds like a Revolver-era Beatles song for the current DIY rock scene. The rest of the album sees the band going through the perfect power pop of early Weezer, J Mascis-worthy power chord riffage, and just the kind of bracing indie rock that will (hopefully) never go out of style.

All dates for Swearin' and Screaming Females are listed, along with a Spotify stream of Surfing Strange and videos from both bands, below...

Screaming Females - "It All Means Nothing" Official Video