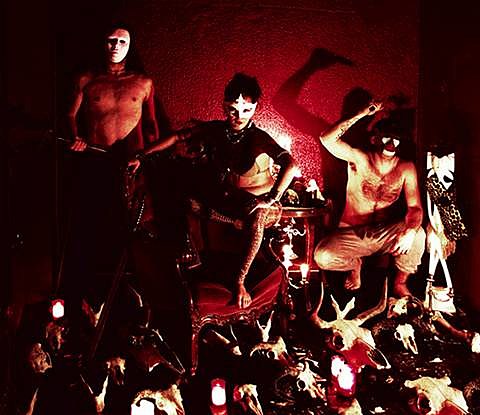 Swedish psychedelic collective Goat released their debut album, World Music, via Rocket back in August and it's gradually been picking up speed in the UK and North America. The definition of psychedelic music continues to widen and while recent purveyors of the genre like Tame Impala envision it the way John Lennon did by stretching pop to its trippy, mind-bending fullest, Goat are more along the lines of Grails, Om, or Prince Rama -- they want to write the soundtrack to your acid trip.

World Music sounds like the cartoonish displays of an LSD experience, with purple mushrooms and dripping, swirling objects in the background. It sounds like the way non-Hindu spiritual leaders imagine Hindu spiritual leaders sound during prayer. It sounds like what you think every band at Monterey Pop Festival sounded like if you never actually went (or watched the film). I could go on, but you get it. The whole thing is pretty fantastical and if you've yet to hear it, you can stream the entire thing and watch some videos below.

Goat will be heading over to the US in April, 2013 for Austin Psych Fest, but before they make their way to Austin, they'll stop in NYC for a show at Glasslands on April 23. TIckets for that show are on sale now.

Album stream, videos, and a list of all North American tour dates are below.

"Goat performing 'Goatlord' in the Temple during the september rituals"