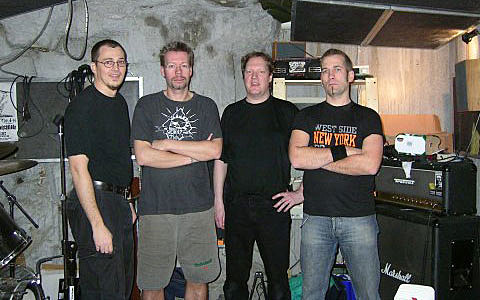 Mob 47 are one of the most widely known and loved Swedish hardcore bands. Their sound was remarkable because they combined a strong Discharge influence with the speed of the fastest US hardcore bands, such as DRI and Gang Green. Unlike Gang Green or Neos, for example, Mob 47 were never sloppy; the result is some of the most brutal hardcore ever created, faster and rawer than nearly anything before or since. -[Shit-Fi]

Mob 47's influence extends much further than just the hardcore/crust community. Reformed in 2005, now the band is poised to play their first NYC show (!) at Knitting Factory on November 11th with Parasytic, Crazy Spirit, Nomad, and Mutant Supremacy. Tickets are on sale. The show is less than two weeks before Parasytic plays another incredible gig at Knit time with A.G.E. and Hellshock on 10/30.

In other news, the previously discussed Venomous Concept show at Europa just got nuttier with the addition of the great Nails, who will support the grind supergroup alongside Strong Intention. Tickets are on sale. Nails released their Unsilent Death LP earlier this year and Obscene Humanity 12" last year via Six Feet Under. Pick up a copy, and while you're there, pre-order your copy of the new Rival Mob 7", Hardcore For Hardcore. Stream tracks by Rival Mob and Nails at the Six Feet Under site.

Nails will perform at This is Hardcore alongside another notable band who is on their way back to NYC, Starkweather. Along for the ride at The Acheron on 8/28 will be Raw Radar War (with Jonah Jenkins of Only Living Witness), The Communion, and Panzerbastard. Starkweather's new LP This Sheltering Night is out now via Deathwish, it comes highly recommended.

On August 1st, Gray Ghost will play The Acheron alongside Tournament, Unreal City, and Ominous Order of Filthy Mongrels. Gray Ghost released their awesome Deep In The Shallow End in hard forms via Chainsaw Safety last year (download a copy), and has the new Succubus 7" out now via Chainsaw Safety/A389 Records (digital/vinyl respectively).

And last but not least, Innumerable Forms has a killer 7" out now on Painkiller Records, Dark Worship. The band, which features Justin Detore of Mind Eraser (and session player on Funebrarum), is old school death metal at it's brutal finest and the band will wreck The Acheron on July 29th when they play with Naughty Girls.

Some tour dates and video is below...