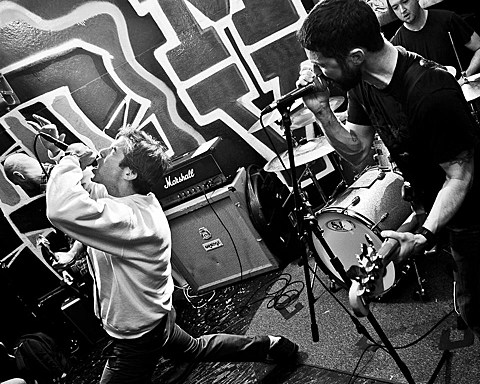 As discussed, DC/Dischord vets Soulside are reuniting for some shows this year including two in NYC: December 17 & 18 at Saint Vitus. Hopefully you got your tickets because those are both sold out now, but if you are going you might want to show up early for the just-announced openers: Sweet Jesus. The band (not to be confused with the '90s Britpop band) has only been around for a few years, but their members have been around longer, having played in Have Heart, Verse, Dropdead and Soul Control. With a resume like that, you know you're getting totally crushing hardcore which is exactly what their new Box EP on Triple-B Records is. You can stream that in full below.

Soulside's other two reunion shows are in DC. The first is with Moss Icon, who open the Rainer Maria reunion show on New Year's Eve in NYC (tickets). The second is with Dot Dash (ex-Youth Brigade, Julie Ocean, Saturday People) and Office of Future Plans, whose Gordon Withers is on a new compilation with another Dischord band Alarms & Controls (and Chuck Ragan and Tim Kasher and more). OFP singer J Robbins is on tour with Jonah Matranga as we speak, and hitting NYC later this month.

Updated Soulside dates are listed, with the Sweet Jesus EP stream, below...