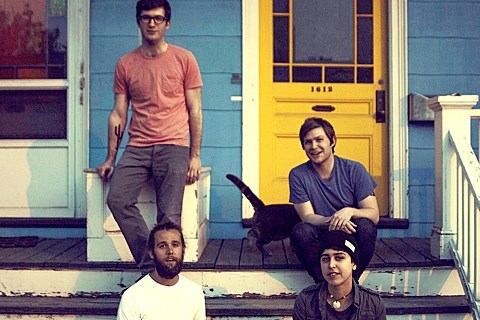 Cambridge, MA's Sweet John Bloom already shared "Blood Moon" from their upcoming debut album on Tiny Engines, Weird Prayer, and now another song, "Moving Target," premieres in this post. It pulls from a handful of '80s/'90s influences, with the shouty indie rock of early Pavement, some of Sebadoh's catchy riffage, and a little Sonic Youth noise too. And at least partially thanks to producer Justin Pizzoferrato (who's worked with Sonic Youth and Dinosaur Jr), they have the aesthetic of that era down pat. Listen below. The album's due out in May, and pre-orders will be available soon here.

The band also have two previously-mentioned upcoming shows: Brooklyn on April 24 at The Gutter and Cambridge on April 26 at Middle East Upstairs. Since we last spoke, the full lineups for those shows have been revealed. Brooklyn has The Men's Mark Perro playing as a duo with Holly Overton (aka MPHO), plus The Fluids and The Dangles; and Cambridge has The Sun Lions and Chandos.

MPHO also play Shea Stadium tonight (4/8) with Ttotals, The Yin Yangs and Heavy Birds. You can stream one of their tracks below too.