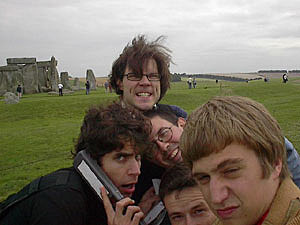 Veteran Boston dream pop band Swirlies will be playing their first shows in almost five years in February '09, including one at Mercury Lounge. Formed in 1990, Swirlies' "Chris R" was the opening track on the seminal 1992 indiepop compilation One Last Kiss that also featured Lilys, Magnetic Fields, Velocity Girl, Small Factory, Black Tambourine and more. Since then, they've released a string of swell 7" singles and albums, including 1993's Blonder Tongue Audio Baton and 1996's They Spent Their Wild Youthful Days in the Glittering World of the Salons. (Most of their records are available as free downloads from their website, by the way.) Few American bands have done the shoegazey thing as well as them.

They've also had nearly as many line-up changes as records, though singer-guitarist Damon Tutunjian and bassist Andy Bernick have remained constant throughout. They've never broken up, just taken a few extended sabaticals. The most recent version of Swirlies, which has been fairly constant since the late-'90s and whose last shows were with the Lilys in 2004, includes Rob Laakso (Diamond Nights, Mice Parade) who is also now in Amazing Baby. Hopefully these shows -- Philly, Boston and NYC -- will spur some new records as well.

What to expect? "I'm sure something will break, there will be lots of tuning breaks, we'll play too loud and I will consequently sing off key, and no one will remember how to play the songs," says Damon. "In other words, it should be business as usual. What better way to spend my spring break, right?"

Tickets for the February 27th Mercury Lounge show are now on American Express presale. They go on regular sale at noon. All dates below...

* w/ Gregory and the Hawk