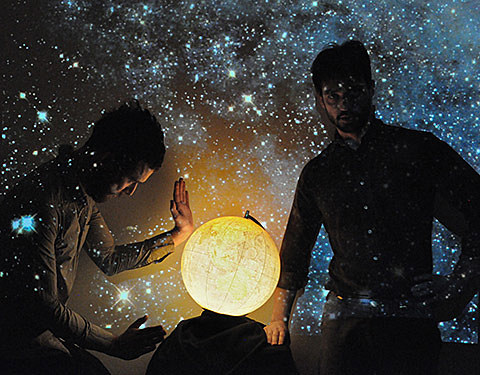 I buy a lot of stuff from Chicago label Trouble in Mind, sometimes without having actually heard it first. (It's one of the few labels I trust will not sell me junk.) I got their most recent "pack" -- a couple LPs and some 7"s -- back in February and amongst the new stuff was a single by Klaus Johann Grobe. Powered by a '60s organ and crazy, fuzzed-out bassline, "Traumhaft" is a real double-take of a single and instantly sent me scurrying to the internet to find who this guy was.

Turns out Klaus Johann Grobe is not a person, but a Swiss duo featuring Sevi Landolt (organ/synths/vocals) and Daniel Bachmann (drums/vocals) who have been pounding out very groovy psych since 2011. "Tramhaft" came out last year in Switzerland along with an EP, and their debut album, Im Sinne der Zeit, will be out April 29 via Trouble in Mind. What really gets you first is the rhythm section, sometimes laying down a heavy motorik groove, sometimes funky, like if Can had jammed with Os Mutantes... and Stereolab owned the only bootleg. (The basslines on this record are absolutely killer.) Landolt's keyboards tie things together -- they sing in German but you hardly notice. We've got the premiere of the album's opening track, "Between the Buttons," and you can stream it in this post.

Album artwork, tracklist, new song stream (plus a stream of the "Traumhaft" single) below...