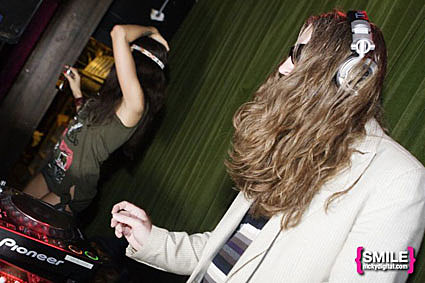 This past weekend was not one of the best I've experienced, but there were some good moments: Thursday night at Hiro, Tommie Sunshine dropped an hour and a half of very interesting, highly danceable, wobbly/fidgety house. Sunday night I got down to a decent, fun set by VDRK at Damn! at the Knitting Factory. He played Fred Falke's Love Theme which was absolutely amazing to hear out.

The less exciting parts of the weekend were Junkie XL's set at Hiro, which started off fine, but got a bit repetitive. Then it went from really hard stuff to a very mellow track which you probably would've appreciated a lot if you were on drugs, otherwise it just seemed a bit cheesy. 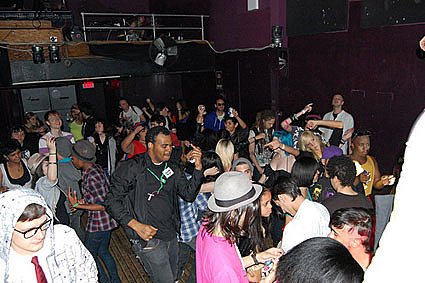 The second disappointing part of the weekend was Apparat's set at the Knitting Factory. The show sold out. The Knitting Factory was as packed as I had ever seen it and people were actually dancing. But I just could not get into it. I went into this show loving what I had heard of Apparat thus far, but I found their live show to be very underwhelming. They had a few moments where they were rocking, but other than that it was just kind of eh. The parts that were more guitar-driven and rocking reminded me of the past few times I saw m83 (who are currently on tour and will be in town next week) a few years ago and once that happened they were all I could think about. I realize that m83 and Apparat are two different bands, trying to accomplish different things, each with their own sound, but they were similar enough that I felt as though I was watching a far inferior version of an m83 show.

From the looks of it, this week in dance should be much better. Fortunately/unfortunately most of it is happening on the same night:
Friday (aka TONIGHT - MAY 30)....... 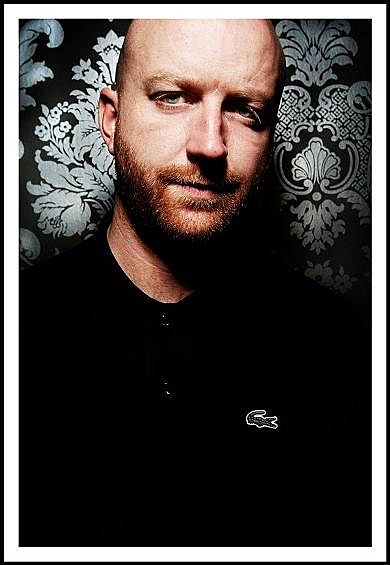 Party in the planetarium! Flavorpill is back again with the latest in their monthly One Step Beyond Series. The combination of great talent and unbelievable setting make for an excellent party. This month they've brought in top UK producer, Switch. Most recently garnering attention from his work with M.I.A. and Santogold, Switch also has created many tracks of his own as well as remixed and produced for a number of artists prior. 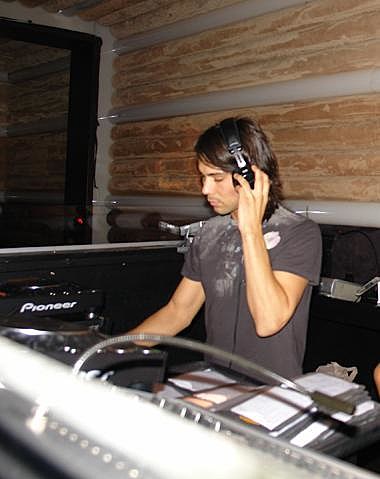 Brooklyn-based deejay Van Scott opens up the night with his super clean mixing of dirty sounds that include everything from electro to b-more to fidget and tech house. Van's highly danceable sets are what earned him his spot with the DJ's Are Not Rockstars crew along with countless residencies all over the city. Be sure to check out the mixes from him and Switch at the top of this post.

Meanred brings it yet again with another one of their seriously fun, non-pretentious, get down's. There are a ton of deejays on the bill including the Herbaliser, $mall ¢hange, Dego of 4Hero, and Memory 9 along with a live performance from disco delights, Escort. They are a great, live, classic, disco band that you do not want to miss. Check out their awesome, Plug-nominated, Muppet-heavy video for "All Through the Night":

Originally slated to be a loft party, the event is now taking place at the Brooklyn Masonic Temple, "...because Funk and Freemasonry is a logical combination." 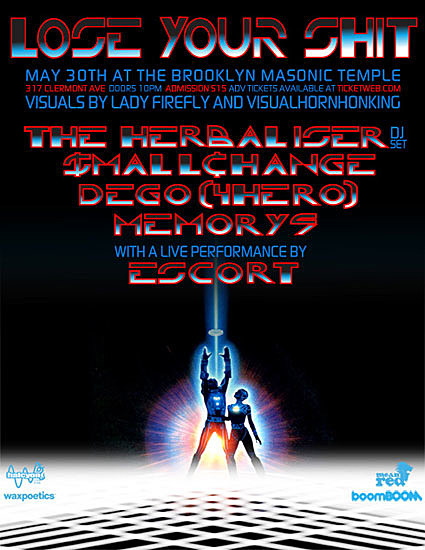 A good option for something to do after One Step Beyond: 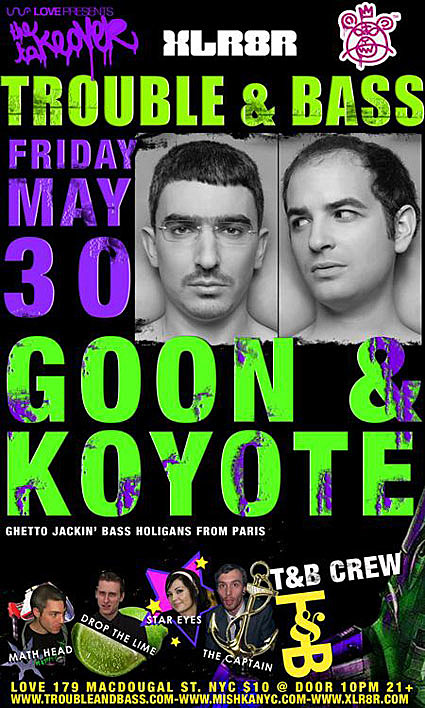 Goon & Koyote are a dj duo based out of Paris that will be releasing their first record on Disque Primeur this year. They just uploaded a teaser, "Wellness is Wild", on their myspace). Get yourself ready for Friday night with the mix they did for Resident Advisor at the top of this post. You can check out the tracklisting and a very brief Q&A (NSFW!) here. There are also some more mixes available from Goon & Koyote as well as many other deejays via the Disque Primeur Podcast.

Trouble & Bass deejays the Captain, Mathhead, and Star Eyes hold it down the rest of the night. 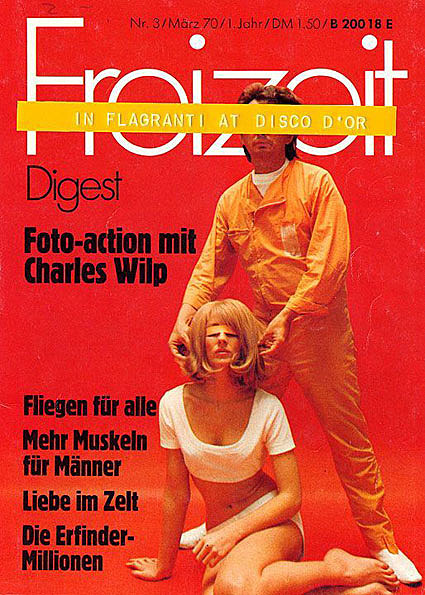 In Flagranti, Justin Miller (DFA), and Jacques Renault (Runaway) at Disco D'or in the Sanctum at the Tribeca Grand. Free with RSVP to events@tribecagrand.com. 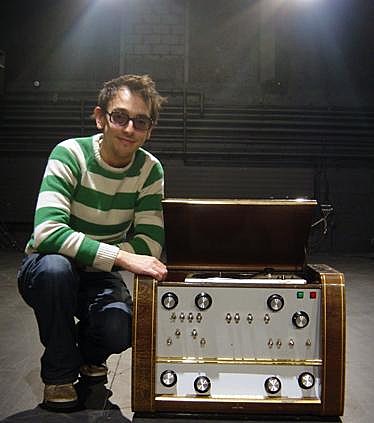 Experimental electro/techno artist Cristian Vogel is doing a live set at the Bunker at Galapagos. He's been deejaying and performing live since '92, was part of the techno/funk group Super_Collider (along with Jamie Lidell who's currently touring and will be here in a couple of weeks), and has produced quite an impressive amount of his own tracks, as well as remixes over the past 10+ years which are listed here. From what I hear Cristian's not around the States much, so be sure to catch this performance if possible. The event costs $15 at the door.

"Resident Spencer Sweeney & friends - Rock, post and proto-punk, dance gems, and a whole lotta everything all at once"....at Santos Party House - the controversial new venue Spencer co-owns with Andrew WK (and whole bunch of other people).

The final suggestion for Friday:

One of my favorite Dirtybirds, Tanner Ross is at Bar 13, though this party is associated with a different label, NY/Buenos Aires-based AirDrop Records. Birds aren't completely out of the picture though, as this is the Die Ente (which is 'duck' in German) release party. Die Ente is an original track by Soulclap who is deejaying the party in addition to Tanner. You can stream the original version of the track as well as Tanner's remix here. 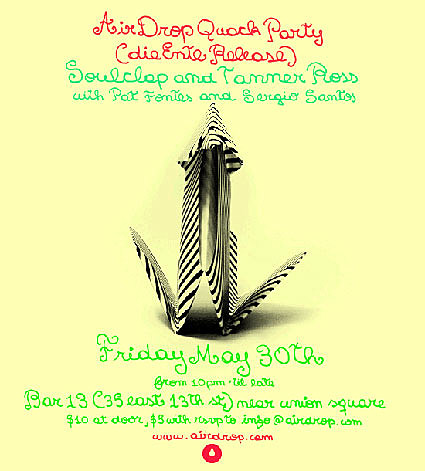 What else do you suggest?

stay tuned for the rest of the weeekend....