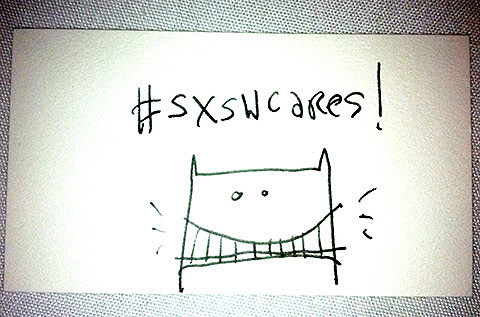 After the tragic events of Wednesday night (3/12), SXSW -- and the venues on Red River where it happened -- has continued. Stereogum's Thursday day party at Mohawk was canceled but the venue (and neighboring Cheer Up Charlies) reopened at 7 PM. Said SXSW:

After talking with the Austin Police Department, we have determined that the most prudent course of action is to move forward with the SXSW shows scheduled at the Mohawk and Cheer Up Charlie's...if we were to turn away potentially thousands of people who will arrive to see the shows, it would create a serious safety issue...to avoid confusion we plan to carry on in order to serve our tens of thousands of participants during this tragic time.

Many performers on Thursday around Austin mentioned the incident, offering salutes and dedications in the victims honor. And there was also a moment of silence at midnight last night to honor those injured and killed. It was definitely on everyone's minds and a constant topic of conversation and puzzlement everywhere you went. SXSW rolled on, but returned to normal, definitely not.

SXSW has set up a benefit fund called SXSW Cares and "funds will be disbursed to those most affected through a community-based process to be created by representatives of SXSW, the Austin Convention and Visitors Bureau and the City of Austin with the Austin Community Foundation." More info is here, and if you'd like to donate, you can do so here.

In other news, the name of the suspect in the incident -- which killed two people and injured 23 others when a car was driven through a crowd of people on barricaded-off Red River on Wednesday -- has been released. Twenty-one-year-old Rashad Charjuan Owen will be charged with capital murder and aggravated assault with a vehicle.