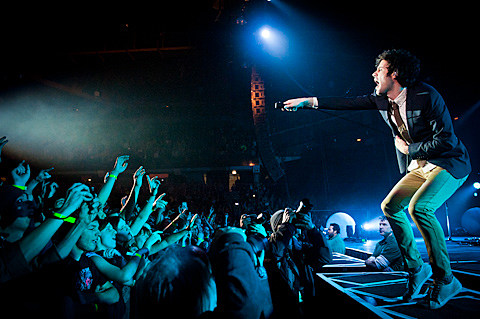 Passion Pit, who already had a song in a Taco Bell commercial, are in Austin for SXSW Interactive to film a Taco Bell-sponsored rockumentary titled Feed the Beat: SXSW 2013, which includes live footage that will be streamed live TONIGHT (3/11) at Hype Machine's Hype Hotel. Once documentarian Sam Jones finishes the film, it will be sourced to all fans for free. The rockumentary will also feature tweets, vines, and instagrams from fans that use the hashtag #FeedtheBeat. Wildcat! Wildcat! open.

Speaking of SXSW, like Hype Machine, BrooklynVegan will be presenting multiple days of shows in Austin this week. Check BrooklynVegan.com/SXSW for full lineups and more details.

Both Hype Hotel and BrooklynVegan Day Parties are also participating in RDIO's "RDIO List," which will get RDIO account holders with the RDIO app priority admission to the day shows.

The Hype Hotel Passion Pit show, though being streamed live to the whole internet-connected world, will only have around 1000 people in attendance - much more intimate than the the headlining show Passion Pit recently played at Madison Square Garden in NYC. Film trailer below...