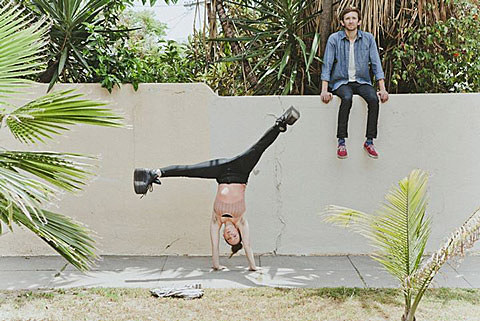 They met in 2012, when Sanborn's solo act, Made of Oak, opened for Mountain Man in Milwaukee. Sanborn was entranced by Meath's distinctive singing and onstage charisma, while she was equally taken by his dense beats, influenced by maverick hip-hop acts like Madvillain. The two bonded over Aaliyah, Aphex Twin and the quirky alt-pop duo They Might Be Giants.

After corresponding for half a year, Meath asked Sanborn to remix a Mountain Man song, which evolved into the first Sylvan Esso composition, "Play It Right." The end result mixes the off-center vocal layering of Dirty Projectors with the fractured rhythms of Timbaland. Idiosyncratic yet hooky, it's one of those songs you'd never expect to hear on the radio that actually might get played on the radio.

Sylvan Esso (aka Mountain Man's Amelia Meath and Megafaun's Nick Sanborn) released their debut album last week via Partisan and if you haven't heard it yet, you can stream it via Rdio.

The band are about to hit the road with tUnE-yArDs, including two sold-out shows at NYC's Webster Hall next month. After that wraps up, it looks like Sylvan Esso will be on their own headlining tour and, while, there's been no announcement yet, they are playing NYC's Bowery Ballroom on September 12. Tickets for that show go on sale Wednesday (5/21) at noon. If the crowd's amped reaction to them at the Governors Ball preparty a couple weeks is any indication, Sylvan Esso are ready for it.

All current Sylvan Esso dates are listed below...