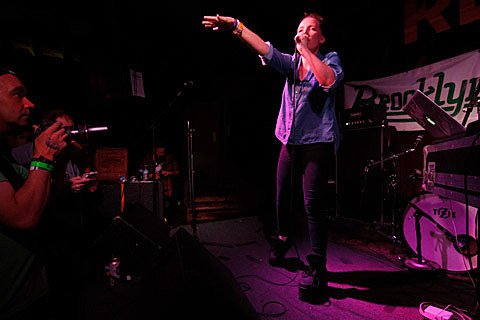 Sylvan Esso's debut album is out in a couple weeks (May 13) via Partisan and the duo have just released the video for single "Play It Right." While it doesn't have the choreographed flash of the "Coffee" video, it does still feature the alluring dance moves of singer Amelia Randall Meath. Watch it below.

Sylvan Esso will play NYC on May 8 at The Westway, an official Governors Ball Pre-Party with Mother and Elizabeth Rose on the bill as well. Tickets for the Westway show are on sale now. They'll be back this summer, opening for tUnE-yArDs (whose new album is streaming) at Webster Hall on June 22 & 23. The 6/22 show is sold out but tickets are still available for the 6/23 show.

There will be more Governors Ball Pre-Parties announced soon. The official Post-Parties (Kurt Vile, Damon Albarn and more) were announced earlier today. All Sylvan Esso tour dates are listed, along with the new music video, below.