Deftones & System of a Down tease their upcoming tour 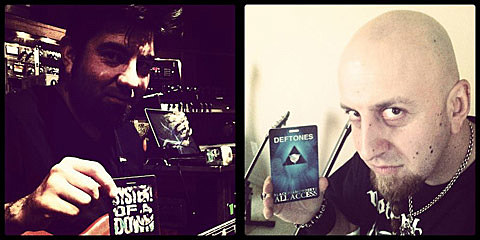 System of a Down and Deftones are teaming up for a string of mostly East Coast dates in August, tagging both PNC Bank Arts Center on August 4th and Nikon at Jones Beach Theater on August 5th. Tickets for both shows go on sale on May 5th. The shows are SOAD's first East Coast dates since taking a hiatus six years ago.

Though SOAD has been largely inactive as of late, Deftones have not. The band, which features ex-Quicksand bassist Sergio Vega while Chi Cheng recovers from his auto accident, has begun work on its new LP with producer Nick Raskulinecz, who was behind the boards for 2010's Diamond Eyes.

Chi Cheng is steadily improving according to a recent update, but he still needs your help

CHI IS READY TO GO HOME!
...and i need your help.
1. need to raise money to fly him home. this requires a medical flight.. runs about $20,000
2. need to raise money to buy him a hospital bed that does amazing things to avoid him acquiring bed sores.. runs about $15,000 USED!
3. (could be long term goal but would be nice to get asap for him) a wheel chair accessible van to transport him to and from his treatments and checkups. i am thinking it could run $20-30,000.

Donate if you can.

In other news, Chino Moreno of Deftones has joined on for another side project called Palms, this time featuring three-fifths of the final lineup of Isis (Aaron Harris, Clifford Meyer and Jeff Caxide):

"Clifford, Jeff and I started Palms a little over a year ago out of a desire to continue making music together after ISIS ended," explained Harris. "Chino joined shortly after and our sound took shape from there. We've worked really hard on this first release and are excited for people to hear it. It's nice to be back behind the drum kit, and with this line up."

"Being a huge ISIS fan I've always dug the moods these dudes convey with their sound," added Moreno. "I am excited to combine my sense of creativity with theirs, and to have fun doing so."

Look for that release via Ipecac later this year - no word on an exact release date.

All tour dates and some video below....

System Of A Down - Chop Suey!

System Of A Down - Aerials

Deftones - Be Quiet And Drive (Far Away) (Video)