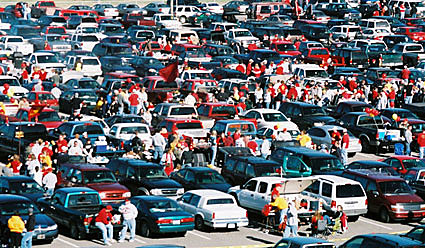 The promoter of the more than 30 concerts scheduled for PNC Bank Arts Center this summer has banned tailgating at five of the events, hoping to reduce alcohol consumption, especially underage drinking.

High-ranking representatives of Live Nation Corp., the promoter, told the Senate Legislative Oversight Committee in Trenton today tailgating will not be permitted rock concerts by John Mayer, OAR, 311, Beatstock and a day-long rock festival tagged Projekt Revolution. There will be no Ozzfest tour this year.

Live Nation, which has nine years remaining on a seemingly ironclad 20-year contract to present concerts at the state-owned amphitheater, the New Jersey Turnpike Authority, and the State Police want to prevent a repeat of the last year's concert season when 2 teenagers died, and 615 people were arrested, mainly for heavy drinking, including 437 who were 20 years old or younger at 34 concerts. [NJ.com]