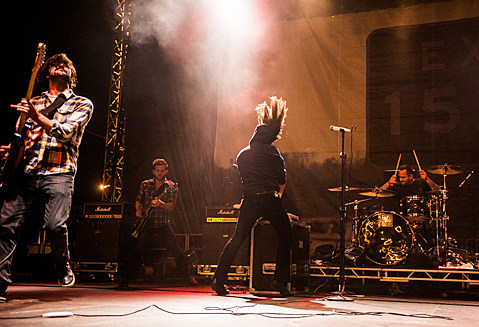 We mentioned back in 2012 when Taking Back Sunday's original lineup toured, playing Tell All Your Friends in full for its 10th anniversary, an album that was mostly ignored by indie critics upon its release, but has arguably lived up well and proved influential, especially as emo kids and indie kids unite. The original lineup is now set to hit the road again in support of their second LP together since reuniting, Happiness Is (due out 3/18 via Hopeless), and though the power ballad first single "Flicker, Fade" lacks the fire that made TAYF so memorable, here's to hoping the tour is still another good opportunity to hear the old favorites with John Nolan and the rest of the original crew back in the band.

The tour includes a North American run with The Used (who time has not treated as kindly) which hits NYC on April 15 at Best Buy Theater. Tickets for that show go on sale Friday (1/31) at 10 AM.

All dates are listed, along with a couple videos from their 2012 tour, below...