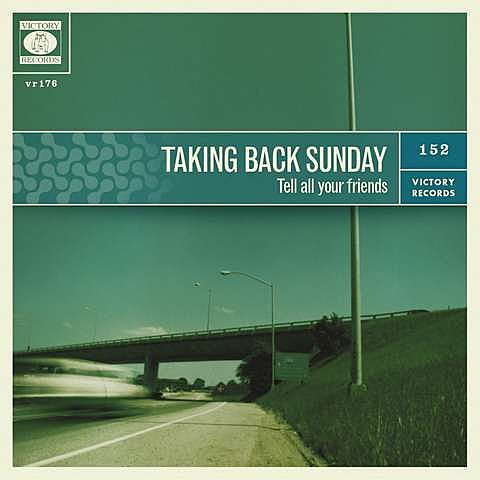 Back in 2002, Taking Back Sunday released their debut album, Tell All Your Friends. After that album, the original lineup split up and TBS continued with new members, moving further and further away from their original sound until they basically became the epitome of MTV pop emo. The original lineup reunited for a self titled album in 2011, but saying that album didn't quite capture what was achieved on TAYF is an understatement -- that album was pretty downright bad.

So say what you will about the band now (or even then), but when Tell All Your Friends came out, it was up there with albums like Thursday's Full Collapse, Brand New's Your Favorite Weapon, and Thrice's The Illusion of Safety for one of the most impacting emo albums of the early 2000's for those teenagers (like myself) who were beginning to discover that you can pour your heart out in music and rock the fuck out while doing so. It did for my generation what Sunny Day Real Estate and Jawbreaker did a decade earlier, and what bands like Cloud Nothings and Touche Amore are doing for kids right now. I haven't really thrown on TAYF in recent years, but it was reissued in 2011 and I'm listening to that reissue on Spotify as we speak and remembering that I know every word to this album and it's got a huge load of nostalgic value for me and a countless amount of others.

I mention this because Taking Back Sunday have announced that they'll be taking Tell All Your Friends on a 10th anniversary tour this fall, performing the album in full at a number of venues across the US throughout October and November. The tour culminates with a NYC show on November 23 at Terminal 5, and it also hits Sayreville, NJ on November 16 at Starland Ballroom. Tickets for both NYC area shows go on sale Friday (8/10) at noon. Bayside supports on all dates.

A list of all dates, videos from the album, and a spotify stream are below.

Taking Back Sunday - "You're So Last Summer" Official Video