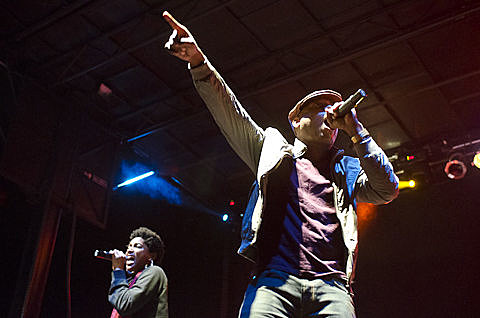 Talib Kweli has pushed back the release of his new LP due to the dismantling of his Blacksmith imprint. In a recent Power 105 interview, Kweli stated that the new record would see release on (also his label) Javotti Media and would be pushed back to February 2013 due to the dissolution of the label. The whole sordid story is available below in a video of the Power 105 interview.

In the meantime, the Brooklyn representative has roped in a full live band for a show at Brooklyn Bowl on December 2, snagging DJ sets from Jasmine Solano and Mad Sol to round out the evening. Tickets are on sale.

In other Kweli news, the MC had the distinct honor of guest starring on the final episode of the long-running show Anthony Bourdain: No Reservations. which took place entirely in Brooklyn. For his segment, he and Tony headed to Bushwick to dine at Roberta's new haute cuisine offshoot Blanca. Check out video of that, a list of tour dates and the Power 105 interview below.

Talib on No Reservations