DJ AM with the legendary DJ Premier and Stretch Armstrong 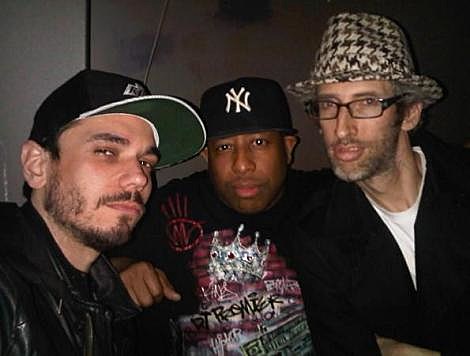 As we discussed before, this Saturday (4/18) marks the Vampire Weekend/Talib Kweli show at Columbia University. According to an email sent to alumni (thx J):

DATE: Saturday, April 18
TIME: 3:00 - 5:00PM
LOCATION: Columbia University's Low Plaza
RSVP: This is a ticketed event open to the first 300 Class of 2008 CAAL members who renew their annual CAAL membership by April 13th. Only ticket holders will be admitted through campus gates.

You can try your luck, or you can catch Talib at another appearance scheduled for that same day at the legendary Fat Beats in the West Village where Talib Kweli will join the mighty DJ Premier, Yearround records signees NYGz & Blaq Poet (ex-Screwball), as well as members of the Rock Steady Crew for day of "live performances and signings" in celebration of Record Store day from 1PM - 7PM. Word of advice, get there eaaaaaaaaaaaaaaaaarly. For a full list of Record Store Day events, check RecordStoreDay.com.

Speaking of DJ Premier, his (ex?) partner in Gang Starr, Guru has scheduled a show at SOB's on May 13th with Solar (not to be confused with Guru's other collaborator, MC Solaar) and The 7 Grand Players and featuring K-Born and Highpower. Tickets aren't on sale as of this posting, but are priced at $20/$22 day of the show. K-Born & Highpower is signed to Guru and Solar's label, 7 Grand Records. Guru's new album, Lost & Found, is due on May 19th.

Talib Kweli is also teaming back up with Mos Def for two Black Star shows at Nokia Theatre at the end of May. You can also catch him with Hi-Tek (Reflection Eternal) at the Rock The Bells fest this summer.