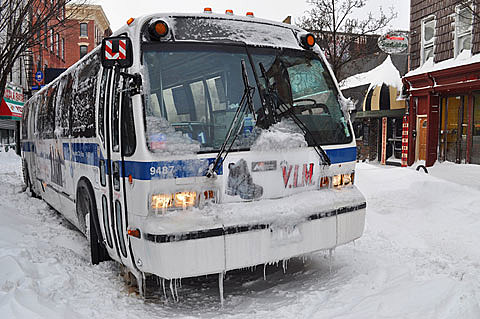 Sunday night's Bouncing Souls show was postponed. Tonight/Monday's is cancelled. Stay tuned for the status of the rest of the "Home for the Holidays" week.

Lincoln Center says "Performances are continuing as scheduled as of now."

BAM is open and running.

Fontana's is open and offering free coffee to anyone that stops in today.

The Disco Biscuits will still play their show at Terminal 5 despite the snow, and despite their drummer being in the hospital.

Union Hall confirms that Mike Birbiglia will go on as planned tonight. The Living Room and Brooklyn Bowl also promise that they are having their scheduled shows (though Brooklyn Bowl's kitchen is closed).

UPDATE: After both Union Hall and Mike Birbiglia publicly said the show will go on tonight, they have now announced that it is postponed until Wednesday.

UPDATE: The jazz show at Mercury Lounge tonight is cancelled.

UPDATE: Tonight's Fantasia show at the Beacon Theater is cancelled.

UPDATE: Whiplash & all shows at UCB are cancelled tonight.

UPDATE: Both acts at Pianos tonight have postponed.

UPDATE: The show at Cake Shop tonight is postponed.

UPDATE: Tonights show at Party Xpo in Brooklyn has been cancelled according to one of the bands who was supposed to play.

UPDATE: "We regret to say that the Tank office is closed today due to the snow storm in New York City. As a result, Rob Gorden's "True Stories" show for tonight is postponed until January 31, 2011 at 7pm "

UPDATE: Coco66 is open with a DJ all night, and Rockwood Music Hall appears to be open and running with a full lineup of live music.

Make sure to check with venues before you trek out to a show, though with Lauryn Hill at Highline Ballroom tonight, you're probably screwed either way (kidding!) (sort of).

UPDATE: Highline Ballroom released an update about the Lauryn Hill show. It reads: "***PLEASE NOTE DOORS AND SHOW TIMES HAVE BEEN PUSHED BACK ON THIS SHOW DUE TO THE WEATHER. KEEP CHECKING BACK FOR MORE DETAILS.***"

UPDATE: ***PLEASE NOTE LAURYN HILL HAS BEEN RESCHEDULED FOR FEB 1ST. ALL TIX HONORED. REFUNDS AVAILABLE AT POINT OF PURCHASE.***

Speaking of Highline Ballroom, last night's Talib Kweli/SAS/Jean Grae show was postponed until January 3rd. All tickets will be honored or you can get a refund.

Gwar braved the snow and slaughtered humans at Best Buy Theater in NYC last night, but our photographer had to cancel, and Gwar couldn't make it to their Vermont show tonight.

If you know of any snow-related cancellations or postponements, please leave them in the comments.