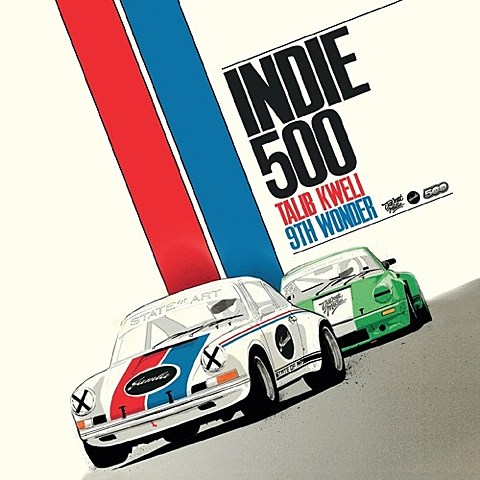 Talib Kweli recently released his collaborative album with 9th Wonder, Indie 500, which Mosi Reeves reviewed for Pitchfork today, giving it a 6.3. Talib was not very happy with this review, and published his own review of Pitchfork's review. It begins:

In the first sentence of Pitchfork.com's review of INDIE 500, a reviewer who is associated with music review site rhapsody.com writes abut how I criticize and then distance myself from celebrity straw men with the line "celebrities be making money on the powerless, their silence in the face of injustice is just cowardice." He then goes on to suggest that I myself could be viewed as one of the these celebrities that I am critiquing because I "visit eateries with Anthony Bourdain, debate politics with Bill Maher and engage in public arguments like the one with Don Lemon." As if to suggest I do these things strictly for celebrity currency and not on my own terms. What this reviewer fails to mention is that Bourdain had me on the last episode of No Reservations because it was set in Brooklyn, and I rep the borough well. I was invited to Bill Maher show not because I don't speak up against injustice, but precisely because I do. I didn't call Don Lemon out about CNN's Ferguson coverage from CNN's New York headquarters, I did it live from Ferguson Missouri. At night before the cameras showed up I got chased by police carrying tear gas, I was face down with a rifle in my back, not in some truck safe with Don Lemon somewhere.

It continues, critiquing the idea of blog reviews altogether:

Blogs are trying to keep the eyes, literally by the second. This means constant, non stop content and reviews of pieces of art that are lauded for being first, not fair. How could a writer, any writer, take in an album that took us a year or two to put together, in one day? One week? They couldn't. So they rely on personal bias and past musical knowledge to fill in the blanks, which is where that whole "celebrity straw man" thing came from. They rush their reviews, so they make assumptions and write reviews that are factually incorrect. They take lyrics completely out of context and judge them for the world to see, all because they didn't have the time to let the lyrics sink in. This makes it very ironic when Mosi writes that the "execution felt rushed" in terms of INDIE 500.

There's a lot more where that came from, and you can read Talib's whole review here. He gives Mosi's review a 3.6 (h/t: Gary Suarez.)