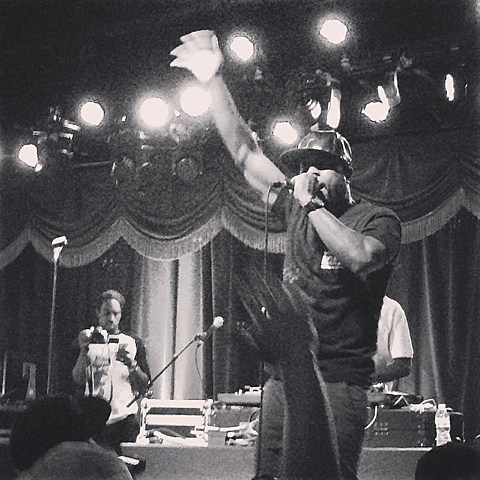 On Thursday (6/24), hip hop legend Pete Rock celebrated his new Petestrumentals 2 album with a star-studded release show at Brooklyn Bowl. He brought out advertised guests, including Sean Price (who host Pharaohe Monch also rapped with), Slum VIllage, Large Professor, Das EFX and more. Plus there were some surprises like DJ Premier, who held down the DJ booth for Pete to end the night on the mic, and Talib Kweli, who came out early on to play his hit "Get By."

Talib will be back at Brooklyn Bowl twice in the next week, with live full-band shows on Wednesday (7/1) and Thursday (7/2). Both will be opened by Rapsody, Niko Is and K Valentine. Tickets for night 1 and night 2 are on sale now.

Pete Rock also has other NYC appearances coming up, including one TONIGHT (6/26). It's the "Masters of Ceremony" show at Radio City with fellow legends Rakim, The LOX, DMX, Shabba Ranks, Mase, Brand Nubian and Das EFX. Pete's playing as a duo with longtime collaborator CL Smooth. Tickets are still available. After that show, Rakim, The LOX and other surprise guests head to the Blue Note for a 12:30 AM jam with The Soul Rebels, Slick Rick and surprise guests (tickets).

Pete also performs at the screening of Nas documentary Time Is Illmatic on July 19 in Queensbridge Park. That's a free SummerStage show.

Pete's also one of the five remixers on Panda Bear's upcoming remix EP. Listen to his taken on "Crosswords" and check out the tracklist for the EP, below...