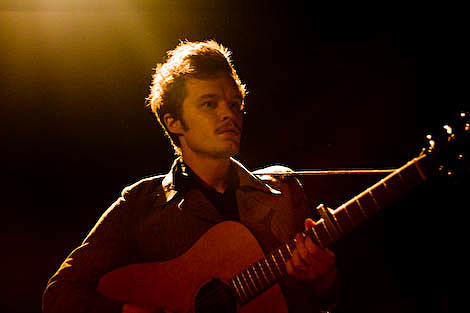 The Tallest Man on Earth completed a two-night run of shows in NYC last night (4/15). Tuesday's show was at Union Hall. Wednesday was a headline gig at Bowery Ballroom (pictures coming soon). On tour with Red Cortez, Tallest Man has just two US shows left - a coffee shop in Alfred, New York on Friday, and a spot at SUNY's Culture Shock Fest on Saturday.

After that it's back to Sweden (probably), but not for long. The Tallest Man on Earth is the second band confirmed for the BrooklynVegan Northside Festival show at Music Hall of Williamsburg in Brooklyn on June 12th. The first band confirmed was John Vanderslice. More artists TBA.

Other Northside shows at MHOW include The Hold Steady, Bill Callahan, and Asobi Seksu who are also playing with Yann Tiersen at Irving Plaza tonight (4/15).

Vanderslice/Tallest Man tix are on sale, or you can go the badge route.

Tallest Man's "It Will Follow the Rain" video, below...