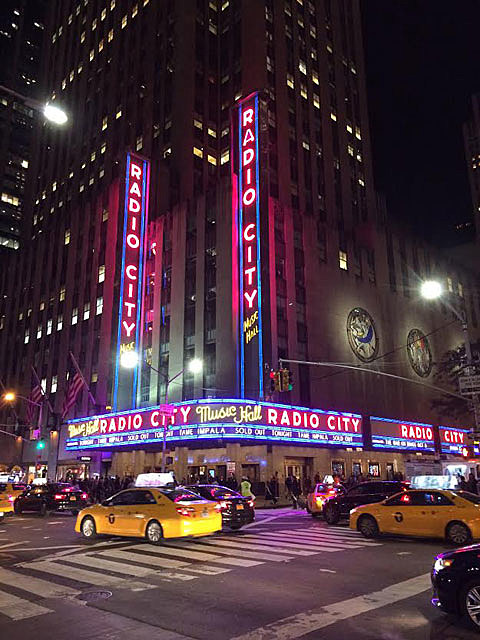 Tame Impala, who played Austin City Limits on Friday, headlined a sold out show at Radio City Music Hall in NYC last night (10/6). With a giant backdrop of psychedelic visuals and lights and fog to match, the giant-sounding band had no problem filling the giant room with a crowd-pleasing multi-sensory experience. Check out the setlist below.

The lawsuit had been filed by the rights management organisation BMG.

It claimed Steve Pavlovic, the founder of Modular Recordings, had withheld royalty payments from the Australian band.

But the case has now been dismissed, with Mr Pavlovic being cleared...

...The system of paying royalties is "complicated. It's so complicated," according to the band frontman Kevin Parker.

More at the BBC.

Meanwhile, the band is probably (hopefully) making a ton of money thanks to their hit new album Currents, undoubtedly one of the best of the year. Riding high off this success, the band also had no problem selling out the very big Terminal 5 which they play tonight. What's next for the Australian band? Arenas? Barclays? MSG?

Like last night, Tame Impala's NYC show competition (but not actually competition) tonight includes the Kurt Vile / Waxhatchee tour which takes over Webster Hall for the 2nd sold out night in a row. A big night for classic rock-tinged indie rock in NYC, tonight is also the first of two War on Drugs shows. It takes place at the relatively intimate Music Hall of Williamsburg, and should warm the band up nicely for their own Radio City show which happens Thursday (who's going to Radio City twice this week?).

Ex-Late of the Pier member Sam Dust aka LA Priest opened the Tame Impala show with his minimal set up. Like at Baby's, "Dust was solo onstage, using some sort of homemade-looking drum machine / sampler / sequencer for most of his backing, with occasional use of guitar and a keyboard." He also sings, and said he was having a lot of fun opening for Tame Impala on a giant stage in a giant, fancy room to the few (relatively speaking) who decided to sit down early. He opens for Tame Impala again tonight.

Check out Tame Impala pictures from ACL HERE, and the Radio City setlist with some pics & video below...

TAME IMPALA RADIO CITY SETLIST (via)
Intro
Let It Happen
Mind Mischief
Why Won't They Talk to Me?
The Moment
It Is Not Meant to Be
Elephant
The Less I Know the Better
Eventually
Why Won't You Make Up Your Mind?
Oscilly
'Cause I'm a Man
Alter Ego
Apocalypse Dreams

Encore:
"Automatic Symphony"
Feels Like We Only Go Backwards
Nothing That Has Happened So Far Has Been Anything We Could Control
---