This week in the music world, we got the killer lead single from Ian MacKaye's new band, we got the first single off The Strokes' first album in 7 years (not bad!), we got new Jason Isbell, and we got to watch Eminem perform at the Oscars for some reason. Also, maybe you got Rage Against the Machine tickets?

A few shameless plugs: I ran a piece on 12 classic ska-punk albums and interviewed Tom Schlatter of screamo vets You and I (about their upcoming reissue, the current screamo scene, and more), so check those out if those are things you might be interested in.

It's been four years since experimental pop artist Katie Gately released her great debut album Color on Tri Angle Records, but she hasn't been totally silent since then. She produced a chunk of serpentwithfeet's own great debut album and did an official remix for Zola Jesus, among other things. So, needless to say, she's had her fingerprints on some very cool projects over the past few years, and her long-awaited sophomore album Loom is yet another one. Like Colors, Loom may get compared to artists like Bjork (who Katie has also remixed) and Holly Herndon, and while I do implore all fans of those artists to listen to Katie Gately if they don't already, I also think Loom continues to prove that she's a force of her own and doesn't really lend itself to any easy comparisons. The album is full of inventive electronic production, supernatural sound manipulation, and rich vocal layering, and Katie matches the complex, innovative arrangements with songs that really get stuck in your head.

Kvelertak's last album (2016's Nattesferd) was my favorite metal album of the last decade, and its two predecessors weren't far at all behind, so needless to say, I have been anxiously awaiting this new album. I've also been a little cautiously optimistic for it, because it's their first since the departure of original frontman Erlend Hjelvik and longtime drummer Kjetil Gjermundrød, but it was at least reassuring to learn Erlend's replacement is someone very close to Kvelertak's inner circle: Ivar Nioklaisen, whose bands Silver and The Good, the Bad and the Zugly have toured with Kvelertak, and who sang backup on “Blodtorst," one of the best songs on Kvelertak's wall-to-wall great debut. (The new drummer is Håvard Takle Ohr.) Also, with all due respect to Erlend (and Kjetil), Kvelertak were always kind of a riffs-first, vocals-second band anyway, so as long as they still had the triple-threat guitar attack of Vidar Landa, Bjarte Lund Rolland, and Maciek Ofstad and the beefy basslines of Marvin Nygaard intact, you'd figure even a lead vocalist change couldn't stop Kvelertak from sounding like no other band in the world.

And on Splid, Kvelertak do prove that to be true. When the riffs hit, you know exactly who you're listening to. As ever, Kvelertak's riffers are taking ingredients from the giants of all types of heavy music (including but not limited to Zeppelin, Sabbath, AC/DC, Ramones, Motorhead, and Metallica), shaking them all up, and shooting them back out as something they can truly call their own. When they lock into a groove, it can feel in that moment like there's no better rock band in the entire world. Splid has some of those moments -- like the way the vocal harmonies and the guitar riffs bounce off each other in the choruses of "Uglas hegemoni," or when they shift gears into full-on thrash metal on the sprawling, nearly-eight-minute "Fanden ta dette hull!" -- but it also often feels like something's missing. Everything feels a little more dialed-back, like Kvelertak want to give you those explosive moments but aren't fully committing. And though each previous Kvelertak album sounded even more larger-than-life than the one before it, this one feels smaller and thinner than Kvelertak have ever sounded.

Even if Kvelertak sound like a "riffs-first" band, Splid makes you wonder if it was the full classic lineup's chemistry -- more so than just the riffs -- that gelled in all the right ways and made them such an exciting band. But to not harp too much on what's not here and instead focus on what is: Ivan, to his credit, does bring something new to the band. He's a more melodic vocalist than the harsher-sounding Erlend (on songs like "Tevling" and "Delirium tremens," he's straight-up singing), so in some ways, Ivan's induction into the band has made for Kvelertak's most widely accessible album. The most accessible moment, and probably the album's best song, is "Crack of Doom," which features a chorus by Mastodon's Troy Sanders and which ranks among the catchiest songs Kvelertak have ever written. It's a good record, but it only hints at the greatness Kvelertak have already achieved time and time again. Maybe the new lineup just has some bolts to tighten -- here's to hoping they knock it out of the park next time.

Tame Impala's long-awaited return finds them coasting on most of the same sounds that made 'Currents' so great, but not moving too far forward or approaching that album's cathartic pop bliss. You can read my full review of it here.

Moses Boyd hails from London's current thriving jazz scene (and is one of the artists on Gilles Peterson's scene-defining 2018 comp We Out Here), and on his new album Dark Matter, he continues to earn himself the title of one of the most exciting new jazz musicians around. It features collaborations with two other artists from We Out Here -- Nubya Garcia (of Nérija) and Joe Armon-Jones (of Ezra Collective) -- as well as UK R&B/soul singer Poppy Ajudha and Afro-fusion artists Obongjayar and Nonku Phiri, and as you might guess from that list of guests alone, Dark Matter completely breaks down lines between genres. It's jazz, it's hip hop, it's soul, it's psychedelia -- it's a lot of things, and whatever subgenre you wanna call it, it's a grooving, entrancing record that hooks you in from the start and ends way too soon.

Godthrymm is the new band of vocalist/guitarist Hamish Glencross (ex-My Dying Bride, Vallenfyre, Solstice), drummer Shaun Taylor-Steels (ex-My Dying Bride, Anathema), and bassist Bob Crolla, and as you'd probably expect from that lineup, they make death-doom in the style of classic My Dying Bride and Paradise Lost. Maybe you don't feel like you need this in a year where there are actual new My Dying Bride and Paradise Lost albums on the way, but Godthrymm are far from a pale imitation and they make for a nice counterpart with what those bands are up to today. Hamish brings with him a harsh growl that keeps Godthrymm from falling into the more alternative rock tendencies that clean-sung death-doom can fall into, and when he does sing clean, it's often in a brooding, Swans-like way that keeps this album sounding evil. And maybe most importantly of all, the riffs! The thick slabs of doom riffage that make up the bulk of Reflections are massively heavy, insanely catchy, and dare I say epic. They sometimes sound more similar to a newer band like catchy-riff masters Pallbearer (who they actually do consider an influence) than to '90s death-doom, and that's even more reason Reflections is worth it. It's a little on the '90s-worship side, but it sounds fresh today too. 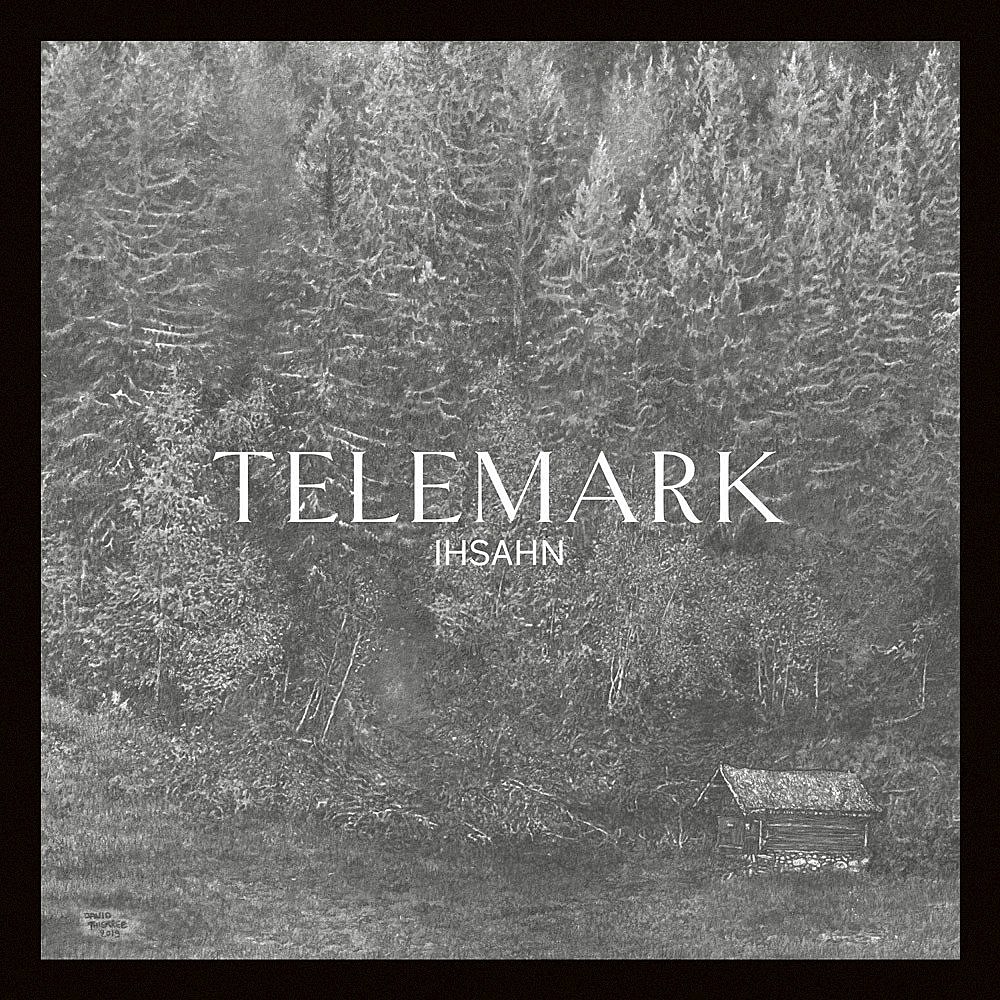 Norwegian black metal legends Emperor are headlining Psycho Las Vegas this year, which (we're pretty sure) is their first-announced US show in over a decade, which is very exciting news. Also exciting news: Emperor frontman Ihsahn has a new solo EP out and it's a return to a rawer black metal sound, following his synthwave-inspired 2018 album 'Amr and the more prog-tinged Ihsahn records before it. It's only got three original songs, along with a genuinely cool black metal cover of Iron Maiden's "Wrathchild" and a totally skippable cover of Lenny Kravitz's "Rock and Roll Is Dead" (why??), but those three songs alone are enough. This is truly badass black metal, and Ihsahn hasn't done this kind of thing in a long time -- arguably not since before he went solo. Its brief running time definitely leaves you wanting more, like, say, a full album in this style. But even if he has no plans for that, getting three new original songs like this from Ihsahn in 2020 feels nothing short of monumental.

Brooklyn trio Bambara continue to hone their dark, swaggering, Nick Cave/Swans-indebted sound on their very good new album Stray, which Bill writes more about in Bill's Indie Basement (where you can also read about the new Cindy Lee and Elephant Stone and more).