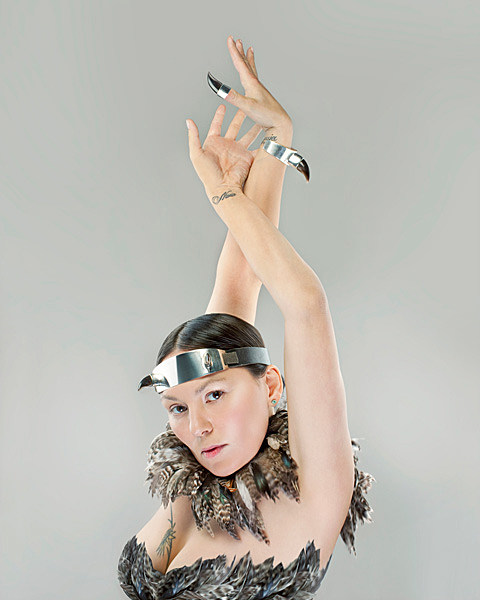 The Association of Performing Artists Presenters is holding their annual APAP conference in NYC from January 9 - 13. While this is mainly an industry event, there are a number of shows in conjunction with it, including globalFEST at Webster Hall on 1/11 and Winter Jazz Fest.

Full Joe's Pub lineup of APAP shows are listed below...

Dan Hoyle, the creator of the award-winning show Tings Dey Happen and The Real Americans, brings a new piece of journalistic theater about finding connection in our digital age. Fresh off his critically-acclaimed run of The Real Americans at Culture Project last spring, Hoyle returns to Joe's Pub with his brand new show Each and Every Thing. From the hard-scrabble corner boys of Chicago to the intellectual temple of Calcutta's famed Coffeehouse, from a Digital Detox retreat in remote Northern California to an intimate confession in Midtown Manhattan, Each and Every Thing brings a comic and riveting story to the stage.

Originally commissioned as part of the Joe's Pub 2013 New York Voices series, Bridget Everett's Rock Bottom became a downtown hit when it opened to critical acclaim in September 2014, and was extended until its engagement ended on October 16. Due to popular demand and its recent sold-out run, Bridget Everett returns for a limited engagement. The ferociously talented Everett wrote the show, a chardonnay-soaked journey through the highs and lows of her life, with the Tony Award-winning songwriting duo Marc Shaiman and Scott Wittman. Longtime collaborators and friends Adam "Ad-Rock" Horovitz and Matt Ray contributed music as well. In it, Everett shares intensely personal moments next to wildly hilarious ones, baring her heart and much more to her audiences. Rock Bottom features new original songs, plus favorites from Everett's monthly sold-out show with the Tender Moments.

Dobet Gnahoré, a singer, dancer and percussionist from the Ivory Coast, inherited the force of the "Bété" tradition from her father, Boni Gnahoré, a master percussionist who plays with the Abidjan-based Ki-Yi Mbock Company, led by Werewere Liking. In that company, Gnahore met French guitarist Colin Laroche de Féline. Having spent time in the well-known Tché Tché Dance Company, Gnahore formed a duo with Laroche de Féline called Ano Neko, which means "let's create together" in the Bété language. The duo toured widely in France (1999-2000) where they settled temporarily following the instability that unfortunately struck the Ivory Coast.

Rising star singer/songwriter Kellylee Evans is a chameleon-like performer, whose natural charm and improvisational jazz vocal style have propelled her journey through jazz, soul, pop and hip-hop over the past decade. She has released two indie solo albums of original songs in Canada; earned two Juno nominations, winning Best Jazz Vocal Album for Nina, her tribute to Nina Simone; and captivated French and Canadian fans. Evans has opened for John Legend, Dianne Reeves, Derek Trucks, George Benson and Willy Nelson. On I Remember When, her forthcoming debut (U.S.) album on Motéma Music, she brilliantly puts her stamp on songs by Eminem, Dr. Dre, Snoop Dog, Kanye West and others.

Mother Falcon is an orchestral indie band born in Austin, Texas that has quickly become an award winning recording act and a top concert draw, performing in rock clubs while maintaining a presence in the performing arts scene scoring plays and films. The group began to coalesce around multi-instrumentalist and composer Nick Gregg while the members were still teenagers, coming together via orchestral and chamber music classes. Composing as a collective, the 18 piece ensemble includes several multi-instrumentalists and most of the players contribute vocals. Guitarist/pianist Claire Puckett, accordionist/pianist Tamir Khalifa and percussionist/saxophonist Issac Winburne form the creative core along with Gregg, though all members contribute musically.

Marques Toliver seemed to burst onto the scene via the UK with an arresting performance on "Later with Jools Holland", and a recent declaration from Adele as her "new favourite artist," but his story begins many years ago in Florida. He began his training in classical violinist at the age of 10, and would later enroll in music school. Frustrated with academia and keen to throw him-elf into the real world of music making, Toliver took a leap of faith and traveled to New York. Through busking and freelancing musician, he quickly befriended fellow artists, eventually playing live and on records for the likes of Holly Miranda, Grizzly Bear, and Miles Benjamin Anthony Robinson.

Most of M.A.K.U Soundsystem's members are immigrants hailing from Colombia, pursuing an active quest for identity through sound and bodies in motion, driven by their fiery grooves and explosive percussion. They have released two full-length albums and one EP, with a fourth album slated for early 2015. Their music has hints of Colombian Folklore, Psychedelic-rock and Caribbean grooves. Lyrically, their music is about the realities of everyday people, encompassing love, hardships, culture, and the immigrant experience, all with a positive, spiritual and sometimes humorous spin. They have performed around the world, including globalFEST (Webster Hall), Chicago World Music Festival, Lincoln Center Out of Doors Festival (NY, NY), Concert of Colors (Detroit, MI), The Cedar (Minneapolis, MN), Small World Music Festival (Toronto, Canada), Levitt Pavillion (Los Angeles, CA) and more.

Aurelio is the world's most-renowned Garifuna musician and the first representative to the Honduran National Congress of African descent. Born in the tiny hamlet of Plaplaya, on the Carribean coast of Honduras, he is one of the last generations to grow up steeped in Garifuna tradition - a natural torchbearer. These traditions encompass the African and Caribbean Indian roots of his ancestors, a group of shipwrecked slaves who intermarried with local natives on the island of St. Vincent, only to be deported to the Central American coast in the late eighteenth century. Aurelio's music is equal parts joyous, seductive, beautiful and bittersweet.

Erin Markey's A Ride on the Irish Cream is a darkly psychedelic story with songs. In this work-in-progress concert showing, an original score and live band become the playing space for the thrills and terrors of a relationship between Reagan (Markey), a vainglorious self-made princess, and Irish Cream (Becca Blackwell), her family's pontoon boat/horse. They are in love, but when their relationship is tested by psoriasis, waterfalls, masculinity, sex for money, cloudy weather, moms and a fatally jealous best friend, the only way to stay together is to remember all the parts of themselves their bodies tried to forget.

Based in Los Angeles, dark glam post-punk band Timur and the Dime Museum creates a rich amalgam of sounds with fierce intensity and theatricality. Led by rising opera singer Timur Bekbosunov, the band appeared on the prestigious ALOUD series; America's Got Talent; and opened for Tiger Lilies, The Red Paintings, Mucca Pazza and Prince Poppycock. They premiered operas Zoophilic Follies by Daniel Corral at Redcat Theater's NOW festival, and Crescent City by Anne LeBaron and the Industry LA. The band made their NYC debut as part of the Prototype Festival 2013 at HERE, produced by Beth Morrison Projects, and are back for a one-night-only performance at Joe's Pub in advance of premiering their requiem "Collapse" in Brooklyn next fall.

Recalling animal noises and various other nature sounds, she was a dynamo, delivering a sort of gothic sound art while she stalked the small basement stage with feral energy." - The New York Times  Polaris Prize winner Tanya Tagaq's music is like nothing you have heard before. Unnerving and exquisite, Tagaq's unique vocal expression may be rooted in Inuit throat singing but her music has as much to do with electronica, industrial and metal influences as it does with traditional culture. This Inuk punk is known for delivering fearsome, elemental performances that are visceral and physical, heaving and breathing and alive. Her shows draw incredulous response from worldwide audiences, and Tagaq's tours tend to jump back and forth over the map of the world. From a Mexican EDM festival to Carnegie Hall, her music and performances transcend language. Tanya's Polaris Music Prize winning album Animism will be released in the USA on January 20, 2015.

Nearly a decade after folk-rock duo Sarah Lee Guthrie and Johnny Irion put out their first album together, the husband-and-wife pair have hit their stride on Wassaic Way, a collection of 11 new songs, released on Rte 8 Records. Produced by Wilco's Jeff Tweedy and Patrick Sansone at the Loft in Chicago, the album finds Guthrie and Irion pushing further beyond the folky sound they established on 2005's Exploration, their first studio LP. After Irion's solo album Ex Tempore in 2007, the live album Folksong in 2009 and the children's collection Go Waggaloo in 2009, the pair began expanding their sonic horizons on 2011's Bright Examples, an album that drew praise from American Songwriter magazine for its "lush, dreamy sound."
"A dazzling array of song and music that whizzes by." - Sing Out, of Dom Flemons's Prospect Hill Dom Flemons pulls from traditions of old-time folk music to create new sounds. As part of the Carolina Chocolate Drops, which he co-founded with Rhiannon Giddens and Justin Robinson, he has played at a variety of festivals spanning from the Newport Folk Festival to Bonnaroo, in addition to renowned venues such as the Grand Ole Opry. In July 2014, Dom released his third solo record with Music Maker Relief Foundation, and his first since leaving the Carolina Chocolate Drops. Prospect Hill finds Flemons digging deeply into ragtime, Piedmont blues, spirituals, southern folk music, string band music, jug band music, fife and drum music, and ballads idioms with showmanship and humor, reinterpreting the music to suit 21st century audiences

Airelle Besson (trumpet) and Nelson Veras (acoustic guitar) are a magicical duet that regularly appears in the biggest European festivals. Besson is a sought-after musician, composer and conductor, having released many albums with her band Rocking Chair. With Veras, who hails from Brazil, she expels a musicality with a touch of danger.

Grégory Privat (piano) and Sonny Troupé (ka drum) decided to work on an original concept around the piano and ka ! They will play the work from their latest album Luminescence (Jazz Family).