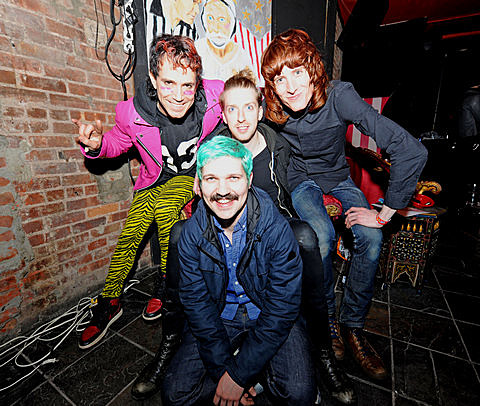 Taye Diggs could not look more butch. Arriving at USA TODAY's Midtown offices to chat about his new role -- that of the transgender heroine of Broadway's Hedwig and the Angry Inch -- the famously handsome actor wears jeans and a T-shirt that hangs loosely over his sculpted chest. His stride is upright and unfussy, a man's walk.

There are the fingernails, though. Diggs' are cut short, but painted in a glittering shade of charcoal black. "This is after a couple of days," he says, explaining the slight chips. "We still have to figure out if I'm going to go completely glam or punk, because Hedwig is a little bit of both. But we're definitely going to do sparkles. I like the sparkles."

...Diggs, 44, [...] began performances last week [and] became the first African-American stepping into the role on Broadway -- "or anywhere else," he figures. [USA Today]

The rock band who currently backs Hedwig and Yitzhak on the ongoing Broadway version of Hedwig & the Angry Inch has booked another NYC show as Tits of Clay. The band, who include members of The Antlers, Holly Miranda's band, These United States, Morningwood, The Wallflowers and more, will play Rough Trade on September 13.

Past Tits of Clay shows have included the actor who at the time was playing Hedwig's roll on Broadway. Neil Patrick Harris and Michael C. Hall have both done it. As the above quote points out, Taye Diggs is the new Hedwig (and the first African American Hedwig) on Broadway, so it doesn't seem unlikely that he might appear at this Rough Trade show. Tickets go on sale Friday (7/31) at noon with an AmEx presale starting Wednesday (7/29) at noon.

Watch a video of Tits of Clay playing "Angry Inch" below...