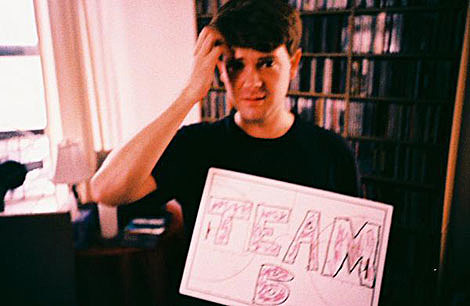 Team B is the new musical endeavor of Kelly Pratt. While written and recorded primarily on tour with Arcade Fire and Beirut in 2007 and 2008, help was also found with his amazing friends Pat Mahoney on drums (LCD Soundsystem), Jon Natchez and Perrin Cloutier from Beirut, and Richard Reed Parry (Arcade Fire) on a track or two.

We don't have a label yet, but the cd is available now through this website, and will be available in a couple of weeks through other online outlets. If you want a copy just click on the link below and ye shall receive. Price is only $10 plus $2.50 for shipping (in the U.S). If you live outside the US please include $6.50 for shipping.
[Team B]

Check out the three songs streaming at MySpace. Download one of them above. Check out Team B live, TONIGHT (November 10th) at Union Pool in Brooklyn (11 pm). It's their first show ever, and they're promising it will be their last this year. The full band looks something like this:

Special guests have also been promised.

Mike Fadem's band The Jealous Girlfriends are going on tour with Nada Surf and have a NYC show coming up (Dec 10) at The Studio at Webster Hall where they also played during CMJ.

Stars Like Fleas have a track on Habitat, "a two disc set including 29 artists, covering the various manifestations of 'electronic music,' and produced as a benefit for Habitat for Humanity." You can get that at Asthmatic Kitty.

A video of Kelly, Tracy and Jon playing with Herman Dune at Union Hall below...