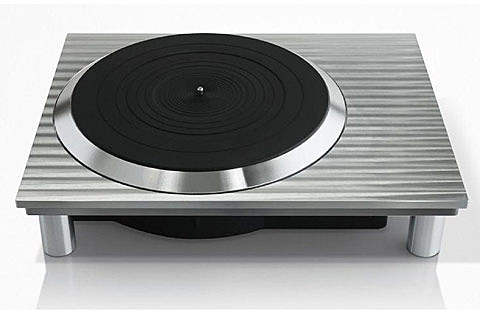 Panasonic eliminated the Technics brand in 2010, as part of the electronic manufacturer's campaign to unify brands, and with it their line of turntables. In particular, the Technics 1200 which remains the DJ standard to this day. Ever since, fans have been begging the company to bring back the deck, and they may get their wish. At Panasonic's press conference at Berlin's big tech show IFA, Wired reported, the company announced Technics is returning as is their turntable series.

The showed off a prototype model, made of very shiny alumninum and built with a new direct-drive motor. As you can see above, it doesn't appear to have any buttons...or a tonearm (shades of '80s Bang & Olufsen) and is, apparently, part of a new high-end line:

"Turntables are a very iconic product for the Technics brand," Michiko Ogawa, director of Technics and executive officer at Panasonic, tells WIRED. "It is important to show our sincere dedication [to that]. The turntable market is very small but it is a very important brand product."

Technics was once a genuinely important name in analogue audio systems, but years of decline saw it phased out entirely in the early 2000s. Panasonic relaunched the brand in 2014 at IFA with a pair of high-end audio systems, with the (admittedly somewhat vague) promise of helping its customers "re-experience music".

Hopefully there will be a new version of the 1200 as well. Until then, there's always Ebay.