Ted Leo at How Was Your Week? in February (more by Erik Erikson) 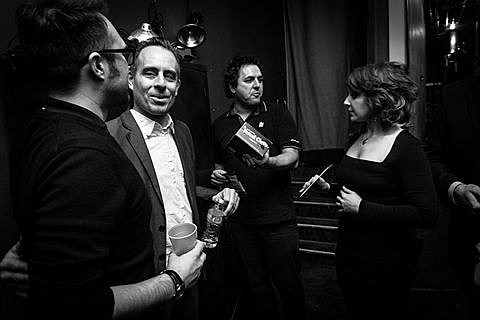 Julie Klausner's weekly How Was Your Week? podcast, which is often taped at The Bell House, will tape there again on June 27 with special guests Ted Leo and the Pharmacists (Ted was also a guest on the show back in February), Jim Gaffigan, Katie Notopoulous, and other very special guests. Tickets for that show are on sale now, and after its taping, it will be available for free on iTunes, like the rest of the How Was Your Week? podcasts.

Ted Leo, meanwhile, plays in Citizens Arrest at Warsaw on Thursday (6/14) as part of the FFF/Chaos in Tejas showcase at the Northside Festival with Ceremony, Magrudergrind and Royal Headache.

Speaking of comedy shows at the Bell House, the Greg Barris-hosted 'Heart of Darkness' featuring Kristen Schaal, Dave Hill, Jon Glaser, and Mind Warrior Hamilton Morris, with music by The Forgiveness w. Aerial East, Das and Alexandre Tannous, happens at the Brooklyn venue on Saturday (6/16). Tickets for that show are on sale now.

Kristen has also been doing warm up shows in advance of her 1-hour taping coming up in San Francisco. She's got two left, and they happen on Tuesday (6/12) and Thursday (6/14) at UCB East. Both are sold out but there will be a standby line for the Thursday show.

In other comedy news, Brooklyn Brewery is hosting a new monthly series called Tom Shillue's Funny Story. The first of those goes down this month on June 21 with Tom Shillue, Bobby Tisdale, John Mulaney, and more TBA. Tickets are $10 and include a free beer.