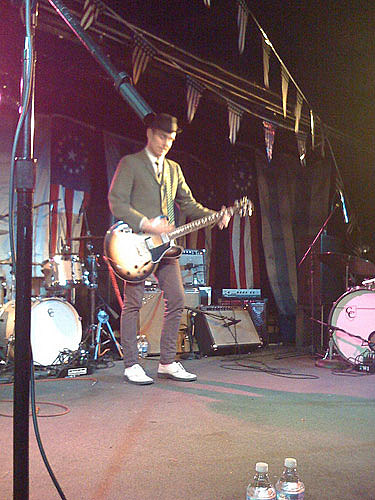 "Last night I went to the Big Shoulders Ball at the Black Cat. The show was tons of fun and without all the pomp and cheese cubes. The ball was "thrift store formal." And it was a benefit too. Highlights: Ted Leo covering Pete Seeger and Curtis Mayfield. Andrew Bird's wondrous violin plucking that he looped and looped. Tortoise finding a rhythm and sticking to it. Ken Vandermark's tribute to Sun Ra. And Honeyboy Edwards showing how the blues used to be played." [Washington City Paper]

In addition to being Obama's Inauguration, today is also the release day for Andrew Bird's new album. All Andrew Bird dates HERE.

Ted Leo also recently played a bunch of covers at Market Hotel, and at Studio B.

Other shows that happened in DC last night were Frightened Rabbit at Rock and Roll Hotel, Jay-Z at Warner Theatre, and the Beastie Boys at 9:30 Club.

Obama is scheduled to take his oath of office at noon today (though they just said on TV that they might be running a little late). Aretha Franklin will sing "My Country Tis of Thee" shortly.

A recent video of Ted Leo playing Bruce Sprinsteen's "Dancing In The Dark" below...

This is Ted Leo playing "Dancing In The Dark" (Bruce Springsteen cover) at The Barbary in Philadelphia, PA on December 14th, 2008. The opening act was Cale Parks (http://www.myspace.com/caleparksmusic ).