"@tedleo and me were repping Jersey hard at 'Mats City. Guy from the Gaslight Anthem - apparently not all that concerned! #jerseystandup" - Titus Andronicus 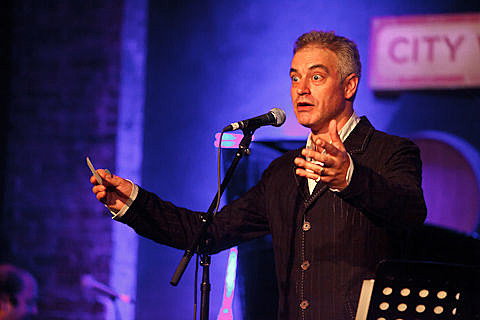 Like Craig Finn the night before (and many others who were on the bill of one of the three Replacements tribute shows at Bowery Electric, Ted Leo took on the Replacements on Thursday night (11/17). Check out the videos below.

One night later, last night (11/18), Ted was one of many special guests at John Wesley Harding's Cabinet of Wonders at City Winery. If you missed it, as previously mentioned, John's tour continues in Brooklyn and NJ on Saturday and Sunday. They aren't Cabinet shows, but they are also pretty special. As his own site reads:

Critically acclaimed singer-songwriter John Wesley Harding is set to tour the U.S. this fall with the all-star King Charles Trio, whose lineup includes John Moen, Chris Funk, Jenny Conlee-Drizos and Nate Query, all members of The Decemberists, Peter Buck of R.E.M. and Scott McCaughey (Thee Minus Five, The Baseball Project). Thee Minus Five are tabbed to support.

Tickets will be available at the door for tonight's show at the Bell House. Advanced tix still on sale for Sunday's show at Maxwell's.

Ted Leo also has shows coming up at The Bell House and Maxwell's. Watch him cover the Replacements below...

-
Ted Leo vs the Replacements