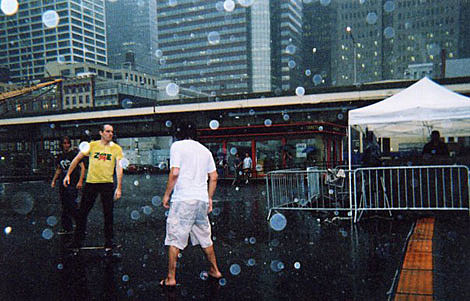 It IS, as I said on Twitter, "complicated." My understanding is that it's a call that kind of has to be made on the spot if it's storming - basically, they try to do everything they can to make as much of a show as can happen happen. So if it's raining hard, they might just wait a while to see if it lets up, etc., but if it's only threatening, even if it's threats are extremely frightening, they won't call it off unless there's danger (REALLY bad rain or too much lightening).
As you may or may not know, we've snatched victory from the jaws of the most intense potential defeat with these things a few times before, including being pretty much the only musical event to actually HAPPEN during the blackout a few years ago, and skating in the rain with the kids (I couldn't find a picture of that, so I gave you Jesus riding a dinosaur instead) while we waited to know if we were canceled or not another year, etc., so you can count on us to try and make the best of it, no matter what happens...
I hope that helps!
And in the words of Sweet Sugar Slam, woo-woot!!

Woah - scratch that - FOUND ONE! Thanks to Hope for sending it... [Ted Leo]

The pic of Ted Leo skateboarding in the rain is above. Last year's Blonde Redhead show at the same location was infamously cancelled at the last minute. Tonight's show starts (hopefully) at 7pm:

A video of Ted playing "Dancing in the Dark" solo for a segment about Bruce Springsteen, and all tour dates (including some with JEFF the Brotherhood), below...

Ted Leo "Dancing In The Dark" - Hangin' Out On E Street