Tom Scharpling, Ted Leo, and Marianne Ways put together "A Very Special Benefit Show" on Friday (12/7) at the Bell House with a great lineup of Ted Leo & the Pharmacists, Chris Elliott (joined by Adam Resnick), John Hodgman, Jon Benjamin, Julie Klausner (joined by Gary the Squirrel), Andrew W.K., Kristen Schaal, previously revealed surprise guests TItus Andronicus, and a secret appearance by Brooke Shields. The show began with an intro by Ted Leo and Tom Scharpling, and then the many acts began their (relatively short) sets with auctions spliced in between. Later on in the show, Tom and Ted returned to the stage together to interview Brooke Shields, and before Andrew WK's closing set, Ted played a song on stage with the auction winner. To end the night, after Andrew WK's set, he was joined on stage by Ted Leo and the Pharmacists and members of Titus for a killer cover of "Louie Louie." A picture of the setlist from the show is below.

Ted Leo was also added to the previously mentioned Concert & Comedy For Sandy Animals: Benefit for the Sean Casey Animal Rescue, which takes place at Littlefield TONIGHT (12/9) with Michael Showalter, Casey Shea, The National Reserve, Jena Friedman, Colleen Pelletier (video), and Rawan Rihani (art). Supercute were initially supposed to play but they had to cancel. Tickets for tonight's show are still available.

In case you missed it, Tom Scharpling also made the mix tape for the first of Yo La Tengo's eight Hanukkah shows last night (12/8). Last night's openers were The Raybeats and Emo Philips. Any guesses on who opens tonight?

Setlist from the Tom Scharpling benefit below... 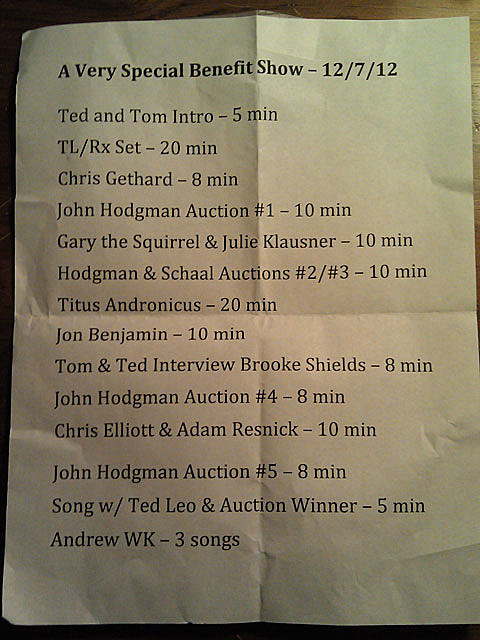