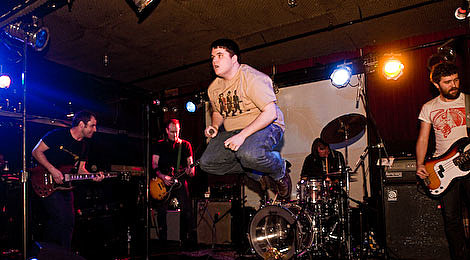 Titus Andronicus played the Music Hall of Williamsburg on April 18th with their current tourmates, the impeccably bearded fellows of Lucero.

Since then, Titus went ahead and added a headlining gig at MHOW to its already busy schedule of upcoming shows. The new Brooklyn show will take place Saturday, June 6th. Tickets are on sale now.

Also in June, Titus is touring with Ted Leo (who has to have a new album due at some point?). They'll stop at Kearny, NJ's Irish American Association on June 21st. Tickets are still on sale for that show.

Ted Leo is known as a pretty jocular guy. A regular on The Best Show on WFMU, his comedy-related credits also include an appearance on Human Giant's 24-hour marathon in 2007 where he dished with show hosts Aziz Ansari, Rob Huebel and Paul Scheer. Last fall, Ted + R/X even backed up a karaoke set hosted by Andrew WK (proof above). Around that time, Ted also released a split 7" with comedian Zach Galifianakis.

He'll continue that trend Thursday, April 23rd when he appears as the musical guest at Comedy Below Canal at 92YTribeca. Paul F. Tompkins hosts the night, which will feature comics Lisa deLarios, Christian Finnegan and others.

Tickets for that show are on sale AND we have a pair to give away. Details (with a video of Ted Leo on the Human Giant marathon) below...


For your chance to win a pair of tickets to the Comedy Below Canal show (with Ted Leo) on April 23rd, e-mail BVCONTESTS@HOTMAIL.COM (subject: Comedy Below Canal). Include your first and last name. The winner will be picked at random and contacted.