Ted Leo at Shea in November (more by Guy Eppel) 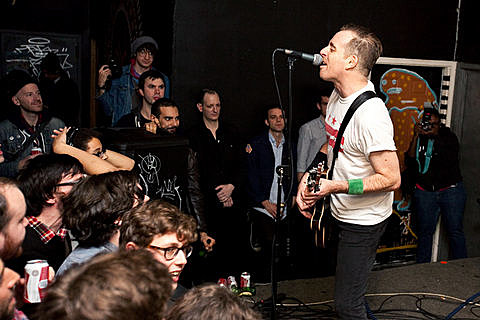 As mentioned, Ted Leo and the Pharmacists will be in the NYC-area for New Year's Eve to play The Bell House on 12/30 (tickets) and Maxwell's on 12/31 (tickets).

According to Ted, there are only a few tickets left for the Maxwell's show and they're going fast. He also mentions that a "*Special Very Exciting* GUEST" will be there. Who do you think it is? If you're going, please say hi to this person who tweeted at Ted that they're "going alone so a 'hi' would make their night."

Obits open the Bell House show and will also play NYC during a short run of dates in March with UK band Fists at Cake Shop on March 17. Tickets are on sale now (yes, advanced tickets for Cake Shop!). All dates are listed below.

In related news, the Fugazi web archives were recently launched and you can check out a listening session with Ted Leo.

Ted's other band, Citizens Arrest, had to cancel their ABC No Rio show which would have went down this past Saturday (12/17) but Omegas, Mind Eraser, and Night Birds still played the venue. Check out pics from that show HERE.