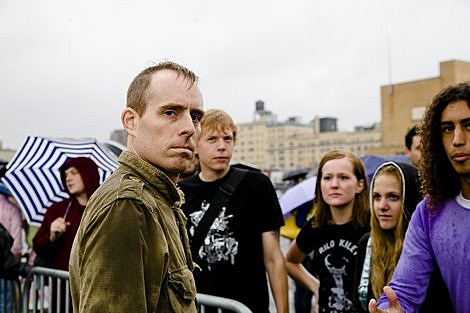 Check out Ted's message below...

HAPPY 60th TO THE BOSS!!
But there's another announcement, too, and of only slightly less importance!
Soooooooooooooo, as many of you know, our beloved Touch & Go Records was forced to shut down most of its operations early last spring, leaving everyone mourning and filled with more questions than we thought we'd have to keep asking ourselves in 2009, and leaving us, specifically, again label-less. In this day and age of uncertainty and upheaval, that's not necessarily the worst place to be, but I consider myself lucky to have encountered and developed relationships with so many good people in the punk and "indie" worlds over the years, that when thinking about trying to work with a new label, and having the necessary conversations, that thinking and those conversations are all done between and among friends, mitigating any potential cons or fears with the knowledge that whichever way you chose to go, you will be helped along by brilliant, rational, and caring people WHO LOVE MUSIC. And I spoke to a lot of them - all of them admirable, all of them alive and vital for all the right reasons, all of them "no-brainers." During a recent conversation over an iced coffee (and then a couple of shots of Jamesons, if I'm going to be completely honest) with Gerard Cosloy in Austin, Tx., however, I thought, "I should hang out with this guy more often," then later meeting the rest of the incredible staff at the office, and counting myself unaccountably blessed at the uncountable bounty of amazing people and labels that I had before me to potentially work with, I made up my mind to join the Matador team.
There are so many options and so many opportunities to do so many things with the music that one makes, but I feel GREAT that as I head off to start mixing some songs this weekend, I can say that I now do so in preparation for an album to be released on Matador Records, most likely sometime in the coming spring.
It's a weird position to be in - being able to look back from my middle age on an adulthood that has largely been spent working with some of the great labels that I so admired since I was but a young pup, and who's output and associations shepherded me along and helped me develop into the person and -ulp- "artist," for lack of a better term, that I am. "In the midst of all of the action," we sometimes can't afford to take in the broader perspective on our life's trajectory but I'm pleased to be able to sit here this morning, look back proudly on all I and we have done with Gern Blandsten, Lookout!, Touch & Go, and others, and then look ahead with drive and excitement to "the Matador years."
Olé, indeed!
(Ah - and just in case you were wondering, Matador is not affiliated with any major label - it's now part of the Beggars Group, which is fully independent and owner run.) - Ted Leo

Catch Ted at one of the shows he's playing in December. JEFF The Brotherhood and Stupid Party have been added as openers to the December 6th one at Bowery Ballroom. Tickets are still on sale.