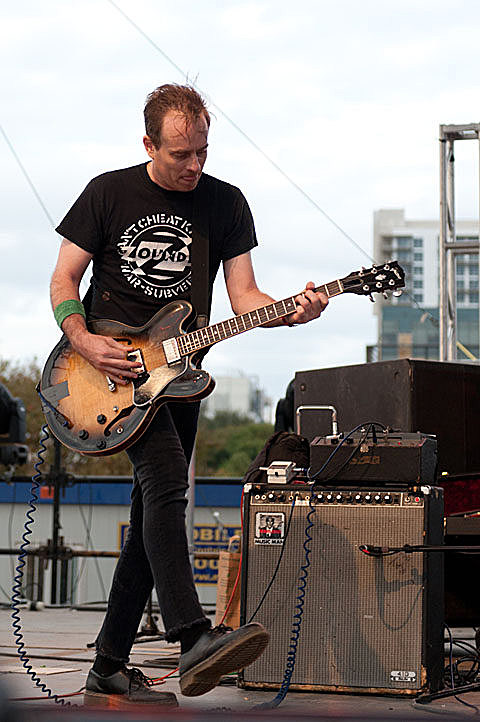 Ted Leo (who recently covered Misfits in Texas, covered Replacements in NYC, and is playing a New Year's Eve show in Hoboken) and Titus Andronicus (who recently lost a member and played two shows with Fucked Up) are teaming up with The So So Glos to play a last minute benefit at Shea Stadium on Monday night. More details, in Ted's and Patrick's words, below...

MONDAY 11/21 - LAST MINUTE BENEFIT FOR THE LAWYERS GUILD, IN SOLIDARITY W/ALL THOSE FEELING THE BRUNT OF THE BATON AND THE CINCH OF THE ZIP TIES
FOLKS! We're playing a last minute benefit show at Shea Stadium in Brooklyn THIS MONDAY NIGHT, 11/21, organized by and playing with TITUS ANDRONICUS and THE SO SO GLOS!!

It's been an emotional week, and somewhere between feeling powerless reading the news all morning, feeling inspired joining in with the marches in the afternoon, and getting on stage to play music for and to and with people, every night, I think we all remembered where a particular strength of ours lies, and we felt we should contribute in the way that seems most natural to us.
So here's the relevant information:
MONDAY NIGHT
NOVEMBER 21st
SHEA STADIUM
20 MEADOW STREET, BROOKLYN NY
8:00 PM

TED LEO AND THE PHARMACISTS
TITUS ANDRONICUS
THE SO SO GLOS

ALL PROCEEDS TO BENEFIT
THE NATIONAL LAWYER'S GUILD
http://www.nlg.org/occupy/

ALL AGES
ALL RACES
ALL CREEDS
ALL CLASSES
ALL SEXUALITIES

There's so much more to say about it, and we'll say it together, in person, Monday night.

In the meantime, Patrick Stickles (from Titus), wrote up an explanation that I don't think there's much more to add to, so I'm going to just reprint it here:

"How are you going to act like you are all righteous? All yr doing is what yr managers and booking agents tell you to do!"

Actually, no. I just got out my cell piece, buzzed my man Ted Leo, told him that war had broken out, heard him say that he saw it also, pooled the strength and enthusiasm of Titus with that of him and his Pharmacists, quickly came upon an agreed course of action, and that was it. No managers, no booking agents, no handlers, no advisers, no publicists, no nothing. Just some Jersey boys seeing that the world is fucked up and pledging to devote whatever meager strength and energy we may have to its correction, as is the charge of every person who has enjoyed the birth right which is our beautiful Earth.

"How can you have this show at Shea Stadium? This bill could fill a bigger place. Why are you denying people who would want to see you play, or, for that matter, turning away more money?"

Because real, sustainable change will only ever begin at home, amongst communities of people who know each other, who trust each other, and who love each other. I like the people who keep, say, the Music Hall of Williamsburg open for business - I like them very much - but I do not love them. They are friends, for sure, but real change must be made with family.

Furthermore, a solitary evening at Shea Stadium demands administrative costs of zero dollars. If there was any other place in town that could maybe make a promise like that, that would be one thing, but I somehow guess that, because they are businesses (and I respect local business), there would have to be some kind of overhead. Because the times are so dire and the urgency of the situation so serious, to allow even one dollar to get mislaid is poison to our hearts.

Besides that, Shea Stadium is, bar none, the best venue in town. It has all the charms and righteous virtues of the DIY scene and the technology to compete with any place in town sonically.

"Why are you giving yr money to the National Lawyer's Guild? Aren't they all working pro bono anyway?"

Well, yeah, but the fact of the matter is that human rights need to be defended by someone, and it has become excruciatingly clear that the NYPD lacks both the ability and the wherewithal to even attempt to do so. If the police will not defend our rights, we will find someone else who will. These lawyers have been massively generous, and we will look forward to putting three thousand dollars into their pockets, so that they may eat, be sheltered, be clothed, and so forth, while they are putting aside their own capitalist dreams for a cause bigger than themselves. We should all be so brave and so generous as these lawyers.

Also, my father was a lawyer for many years, a corporate lawyer, and it was this work that paid for the many privileges I enjoyed as a youth (most relevantly, the privilege to devote much of my mental faculties to my own development as a musician, rather than say, the toilet scrubbing I may have had to do to keep myself alive had I been born to different circumstances). Basically, no lawyers, no Titus. Admittedly, much of my father's work involved moving money around from one massive corporation to another, but he is a truly righteous man, and has since left the law to work as Principal of the economically depressed catholic high school from whence he graduated way back in 1966. I might not think all that much of money changing for my personal tastes, and it is near certain that I will never pursue a career in any field of law, but I kiss my father's feet for the way he busted his ass to make a better life for me. He grew up poor, but he grew up in an America where a man like him, born into poverty, but hard-working, smart, determined, could rise up as high as he wanted, and build a better life for his children. He fought and clawed his way out of Roselle Park, NJ, to the ivy-covered walls of Princeton, to Columbia,
through decades of unending exertion, grunted and sweated through the ranks of school administrators, through another degree (this time law, at Rutgers), up through the ranks of two law firms, all the way to senior partner, and all the way to a life where his son could be given every advantage his own father never could have given him. This was the America my father made himself in. This was the promise that brought my Irish ancestors to America, and this is a promise that I WILL make to my own children, because I REFUSE to let it die, or should I say, to stand idly by and watch it as it is murdered.

"Are you pumped to be playing with Ted Leo/Pharmacists? What about So So Glos?"

ALL RIGHT, WELL, THAT'S IT
SEE YOU TOMORROW
DESTROY POWER
NOT PEOPLE