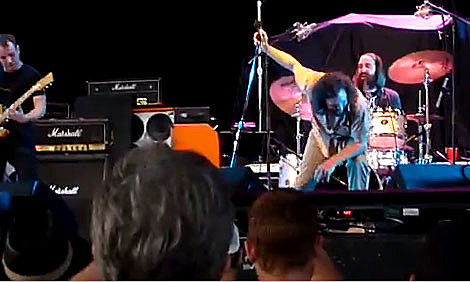 Ted Leo & The Pharmacists, who just got back from playing some West Coast dates, have scheduled a few new East Coast ones for December. One of those is December 6th at Bowery Ballroom in NYC and tickets just went on AmEx Presale. All currently known dates below.

The West Coast dates were supposed to happen right after Ted left Toronto. In Toronto Ted was scheduled to play in a charity soccer game and (again) open for Pearl Jam. Other celebrities playing the soccer game included Rivers Cuomo and Michael Cera. They actually played, but Ted never made it...

"Ted Leo, famed indie rock musician, was also originally scheduled to be at this event, but apparently he got stopped at border security and couldn't make it (or, in addition, open for Pearl Jam the night before!). Also, Rivers Cuomo was there with his Japanese wife and 2-year-old Japanese daughter!! Exciting, eh?" [Until we Eat Again]

Ted never made it to the Pearl Jam show either, so instead his band The Pharmacists played without him (and, much to the delight of the crowd, with Eddie Vedder and Mike McCready). A Little bit more about that, their setlist, videos from the show, and all Ted Leo dates, below....

"When Ted Leo of Ted Leo and the Pharmacists couldn't make it across the border to open up for Pearl Jam in Toronto, Eddie and the boys decided to improvise on the opening act part. For us, that meant we got to see Eddie solo, Mike solo, Stone solo, Eddie and Jeff together, the Pharmacists playing without a lead singer and then Eddie and Mike playing with the Pharmacists! Needless to say, it made an already amazing night even more amazing!! This here is Mike playing a song he wrote for his daughter! Please note how cute Stone is, leaning on the speaker, watching his friend do his first live solo acoustic performance! "